Hurricane Laura... Prep and Clean up...Why it's worth living here... 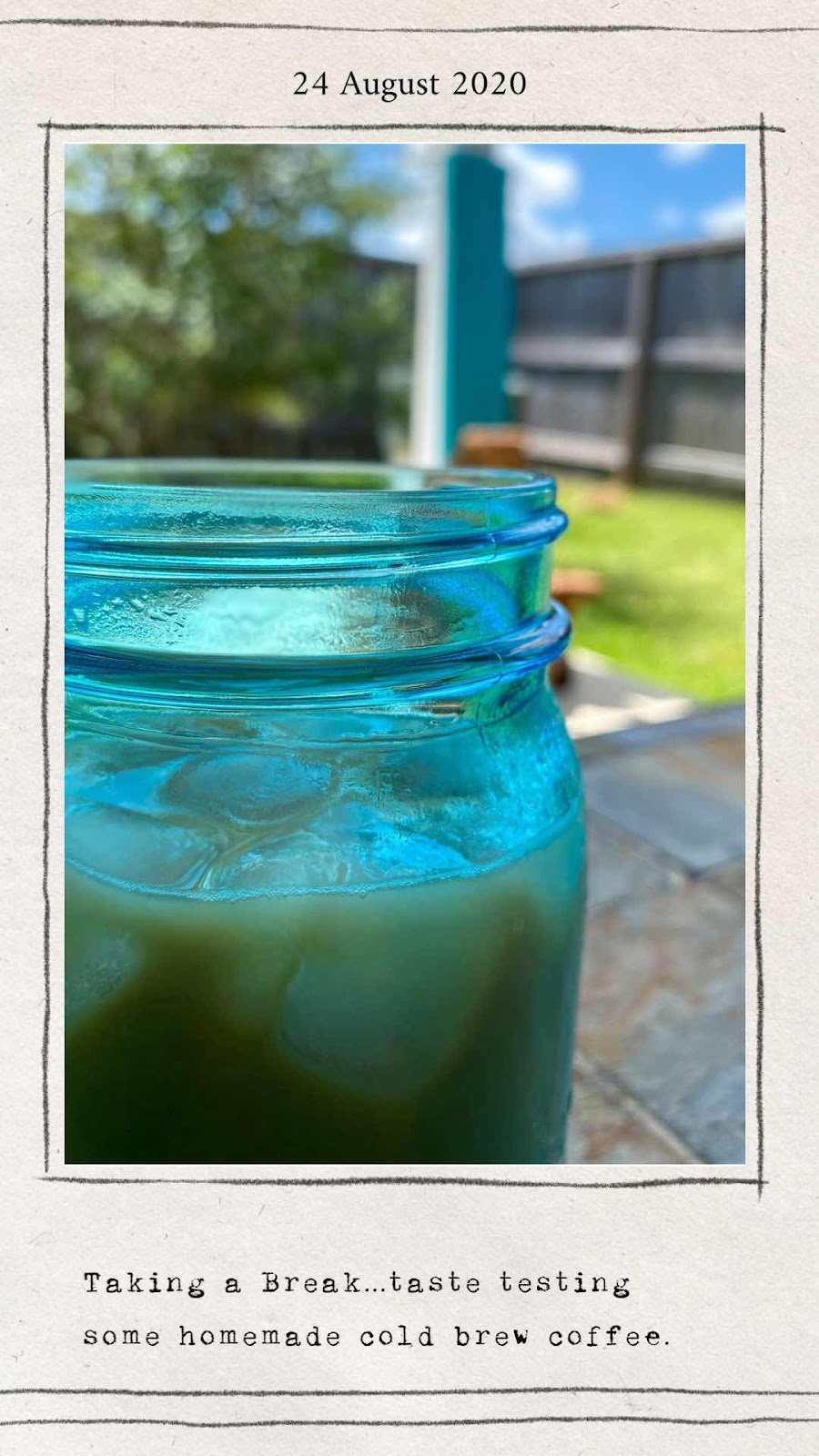 On August 27th, Hurricane Laura hit the Louisiana coastline at a Cat 4 and left a trail of widespread destruction.

We keep a hurricane kit, that’s updated starting in late April and finished up normally in before the end of May. This year, it wasn’t as flush as I would of liked. Mostly because of Covid impact on the supply chain. We had most of what we needed like candles a NOAA Weather Radio, extra batteries, first aid kit, lanterns, food, water, pet supplies, etc. It’s a long list but we found we were missing a few things like flashlights, which are now in the kit.

Everything outside needs to be brought inside or tied down. We didn’t know if we were getting a tropical storm or hurricane. The only thing we did know is that we would be on the clean side of the either one and that our house is protected by levees in case of surge. It was a fast moving storm that was going to pick up size because the Gulf is so warm this time of year. It was fast enough that were didn’t think that flooding was going to be an issue. So our worry was wind.

Three days out, we were still trying to figure out what was happening because both Laura and Marco were in the Atlantic.

So here’s what happens in Casa Stumpp: all laundry is caught up and kept caught up, food is brought in, the house is cleaned, and the most of the patio is packed up.  The frig is cleaned out and ice is being made. Water containers are brought in from the garage. Then the hurricane kit is checked. 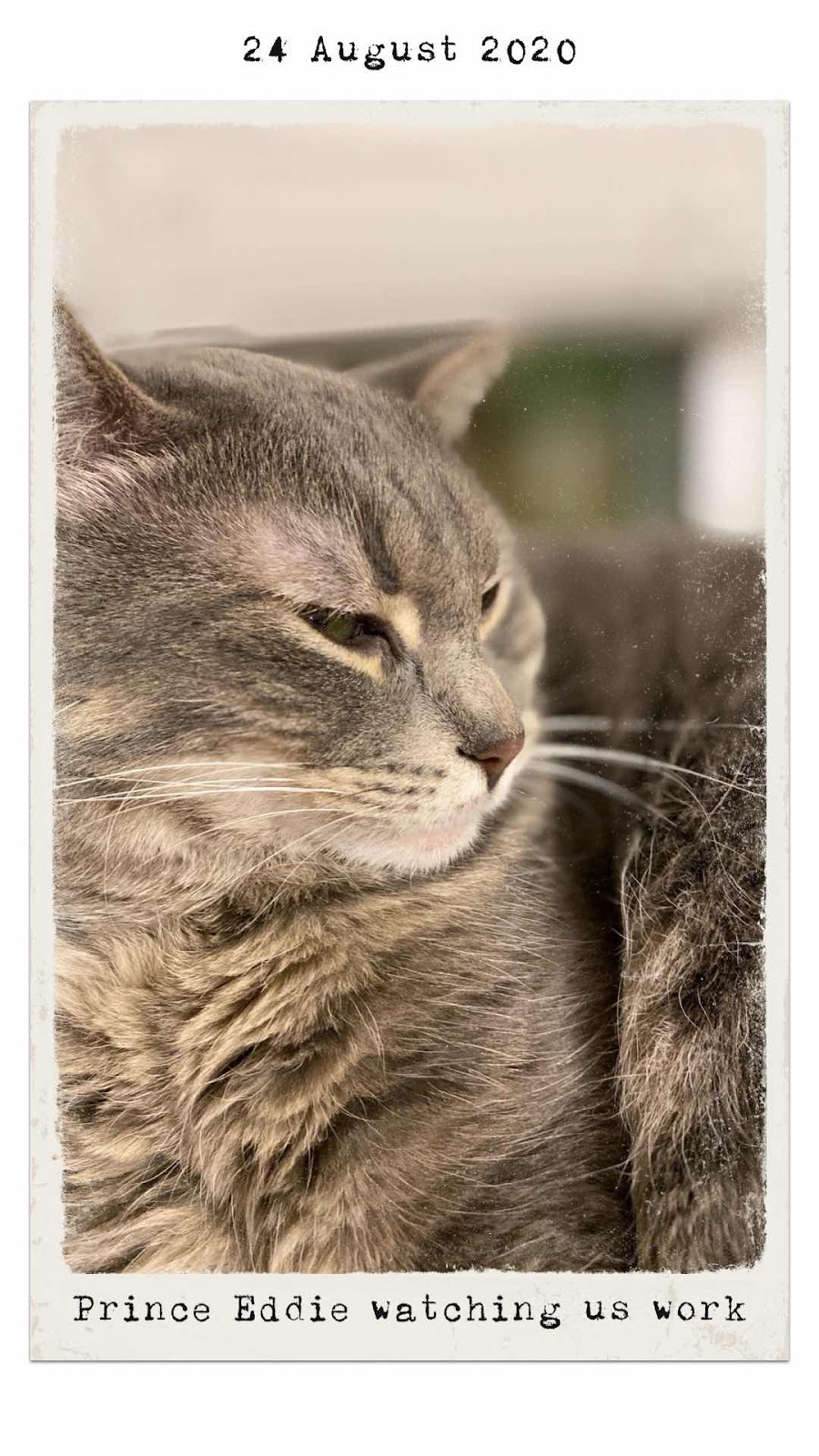 We are now two days out on August 25th, Galveston Island issues a mandatory evacuation by noon.  That means shit got real. Phase two was making sure that all devices were charge along with extra lipstick batteries. We also have a battery that will jump start a car that has USB ports so that we can keep our phones and iPads charged. I made sure that I had enough audiobooks and books downloaded. Check on a few beading projects and made sure all my camera batteries were charged.  Photos of inside the house, this makes it easier to fill out insurance claims. Prepare for the worst is the old saying. 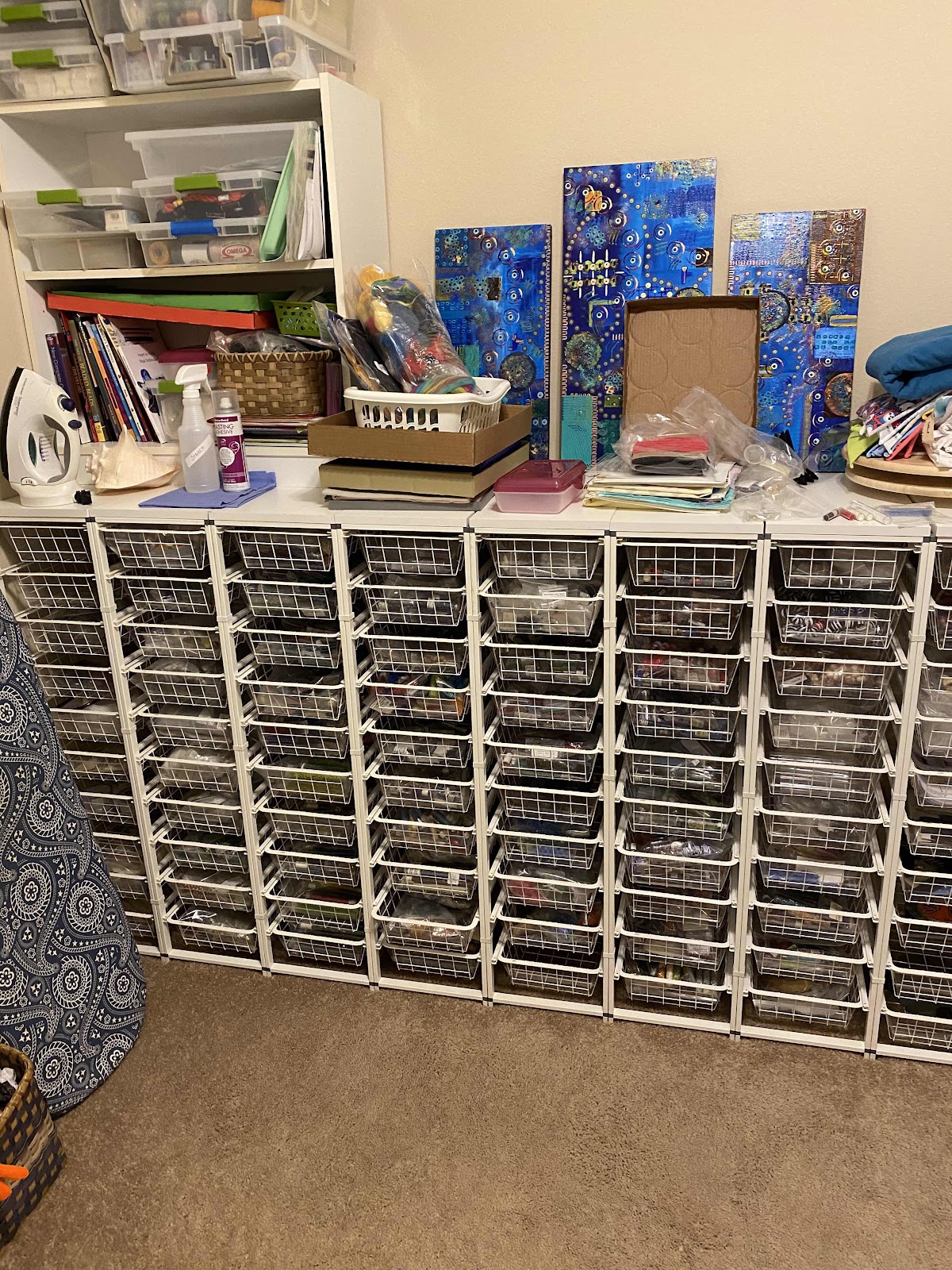 I opened drawers and closet doors for photos as well. Just in case. It didn't take that long. 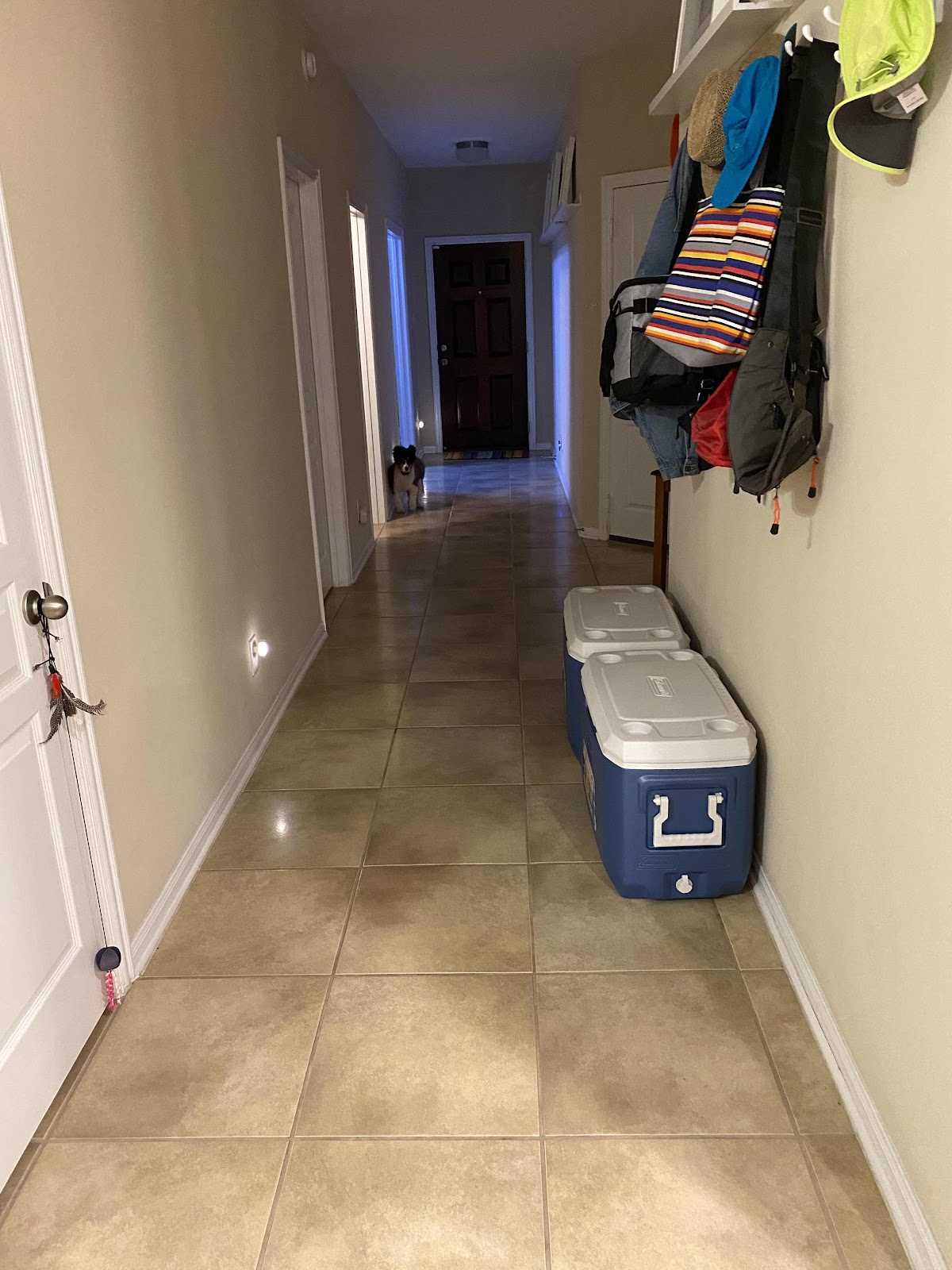 It’s the final phase on August 26th. We are still checking the weather and Bob took the day off to help finish up. We still had to fill water containers, clean all the cat boxes, and finish up the patio. Even though we have hurricane windows, we put up shutters. At 2pm, we started getting some wind, not a lot. Also at that time, Hurricane Laura started making the turn. If she didn’t started making the turn, would have been in the direct strike area. She turned, we got lucky and the forecasters were correct. Phew, I was sweating it for a while.  There was still enough time to pack up and run if we had to. 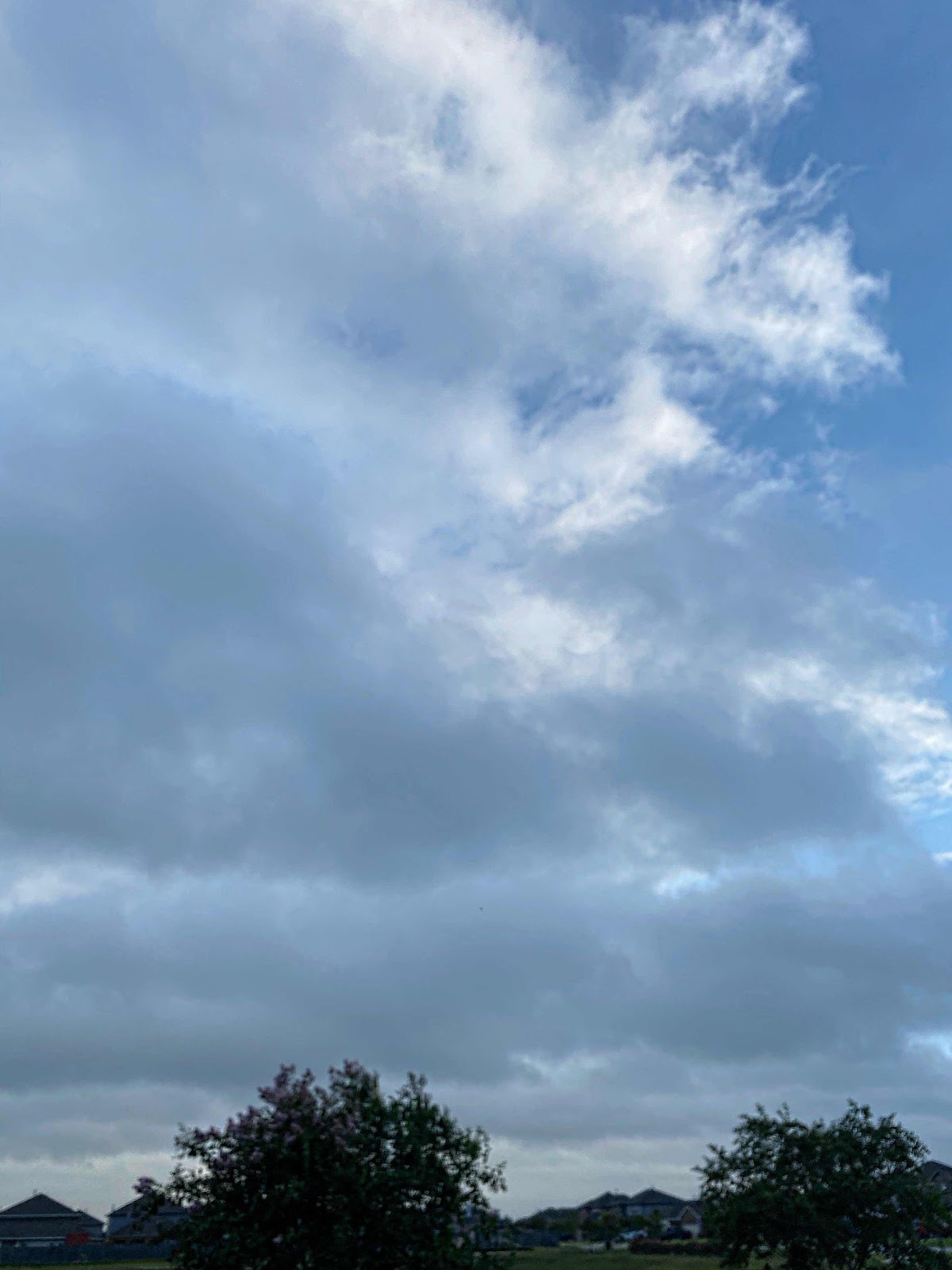 The above is the beginning of the clouds starting to roll in off the ocean. The below is the sunset before Hurricane Laura.
The final things had to be done like finishing up on my cold brew coffee stash and folding up the dryer of towels. The coolers were packed with ice, the car gas tank filled, and dinner started. After the final check, it was a hot shower and a book. 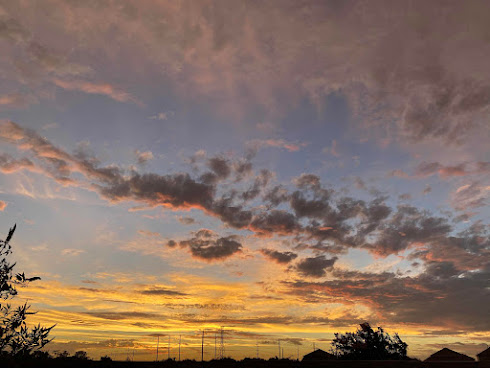 I thought I was going to stay up and wait on the winds from Hurricane Laura. All this caught up with me and I was asleep before eleven.  I woke up to a zoomie cats and a dog that wanted to go out. Coffee on and we went outside to see the damage. Holy moly, we had power, I got coffee, and we had no damage.  We were very lucky...I keep on saying that because sometimes it's just pure luck. 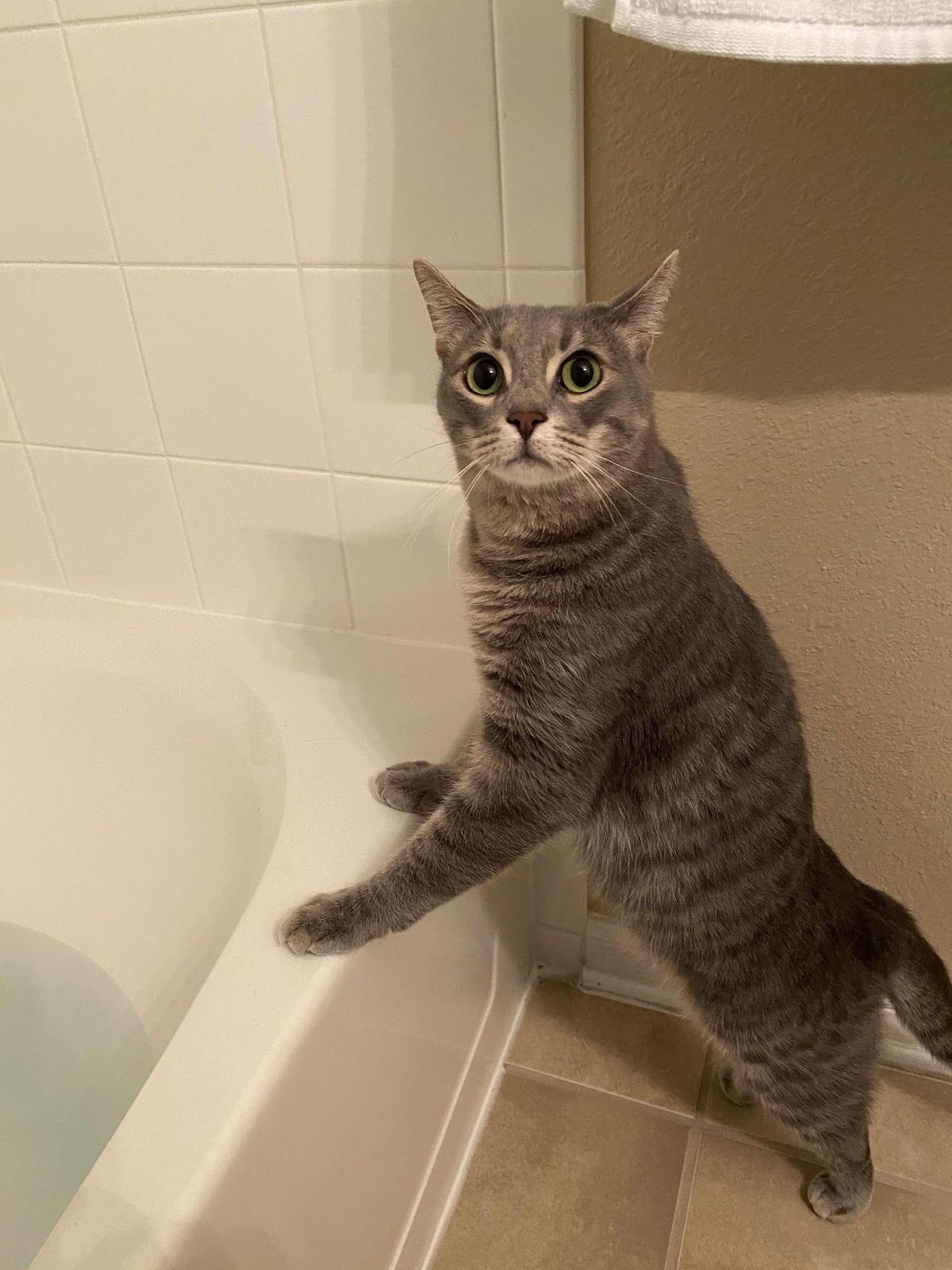 I came inside because I could hear yowling cats. To make a long story short, Prince Eddie Asshat push Warrior Princess Daisy Mae into the bathtub full of water.  This didn’t happen just once, this was the second time. 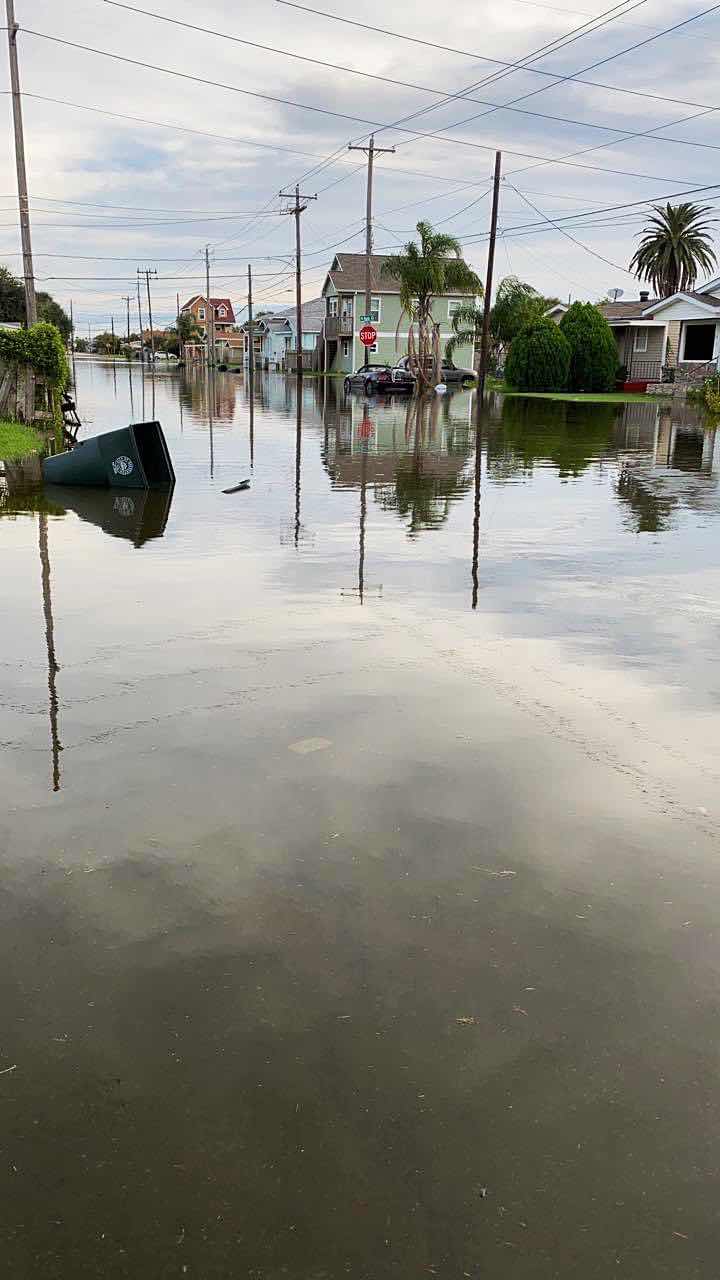 The above photo is a residential area in Galveston. Not bad, not a much water. The hurricane made landfall in Cameron, Louisiana, as a Cat 4 with winds of 150 mph, about 120 miles east of Houston. It was an even closer miss for Galveston, where the eye passed within 79 miles of the county.
There was no structural damage reported on the Island or in the local area but there was lots of debris on roads after storm surge from the hurricane pushed seawater onto the island. Most of debris has been removed and that roads are back open by noon. Residents who evacuated can return. The ferry service was also up and running by noon.
The bottomline is that we got very lucky, so did Houston. 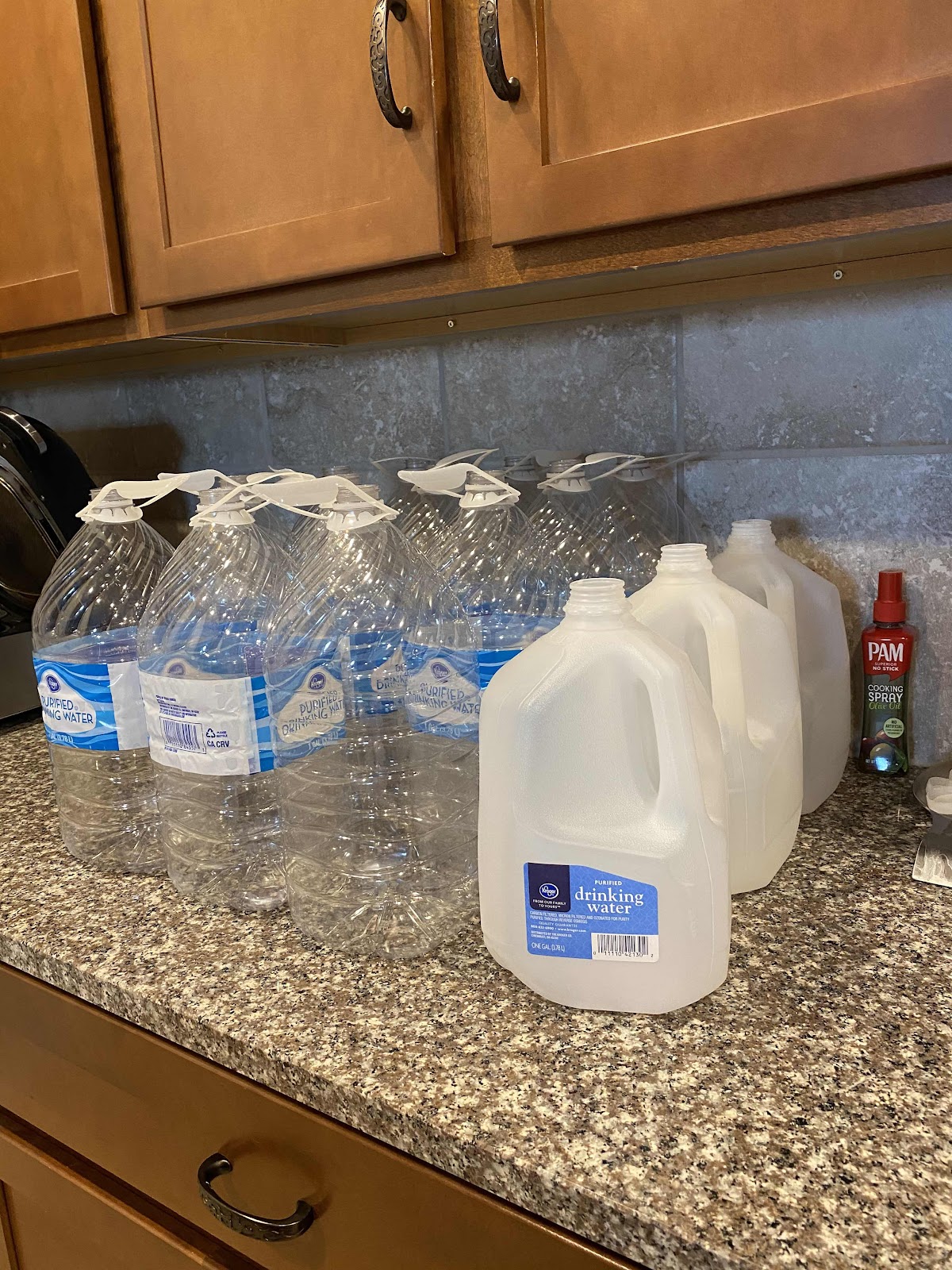 During the day of August 27th, we looked at the news and started cleaning up. We keep a large water supply plus fill up extra containers for the pets. Just in case there's a boil order. So all those have to be emptied, I already emptied and clean the tub because of Eddie. The patio is put back, the shutters are taken down, and the coolers are emptied. The reason why I'm writing about this is that the prep tear down is easier but by the time that rolls around, you are beat. It's also hot fried hell outside.
We only did a few things and chilled for most of the day. Bob had taken the day off. 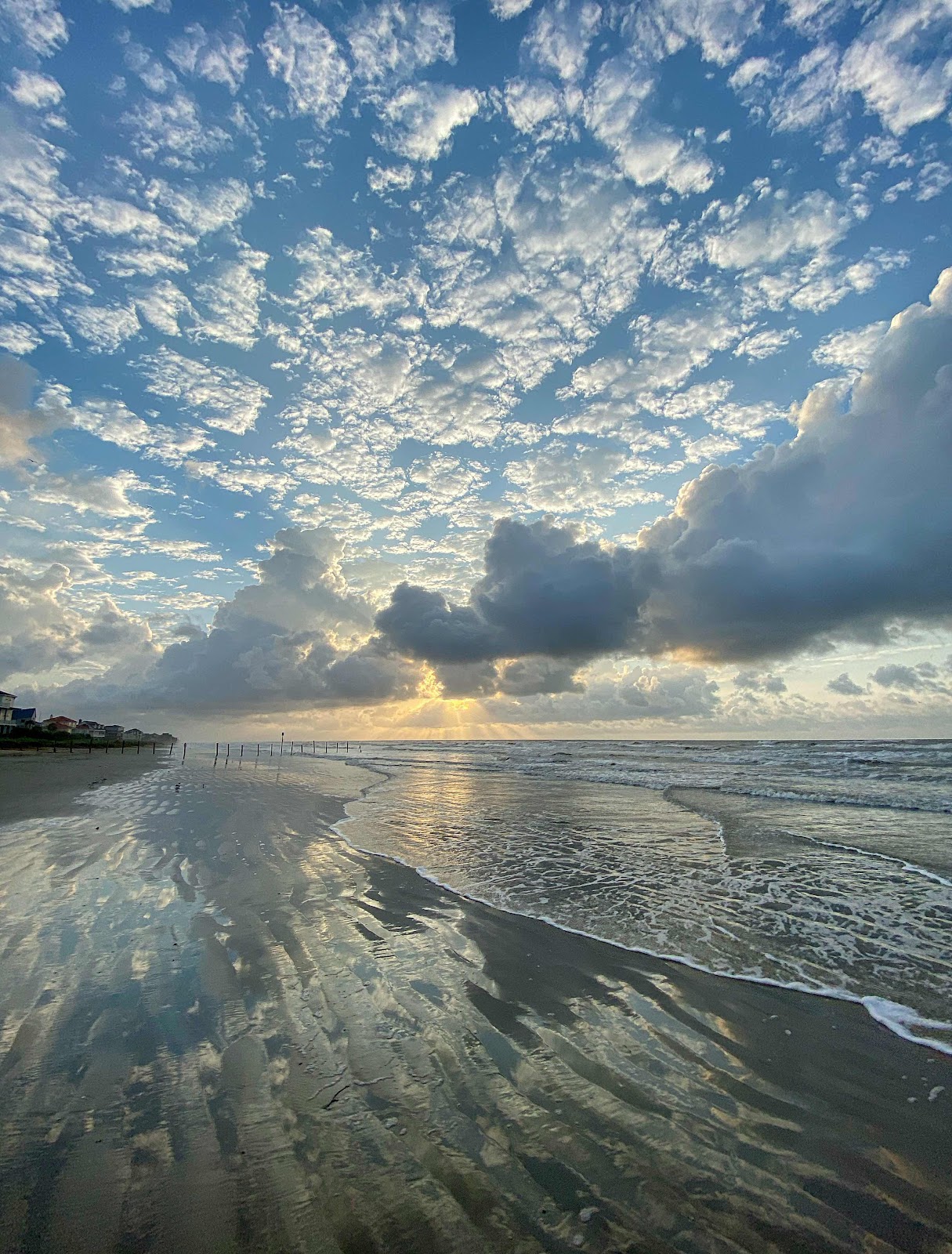 The day after, we got up early and went to the beach. I guess to check to make sure it was still there. I came to the realization that this is the reason why all this is worth it.  I still thinking that this was the best move we made. A sunrise at the beach is the best thing in life. 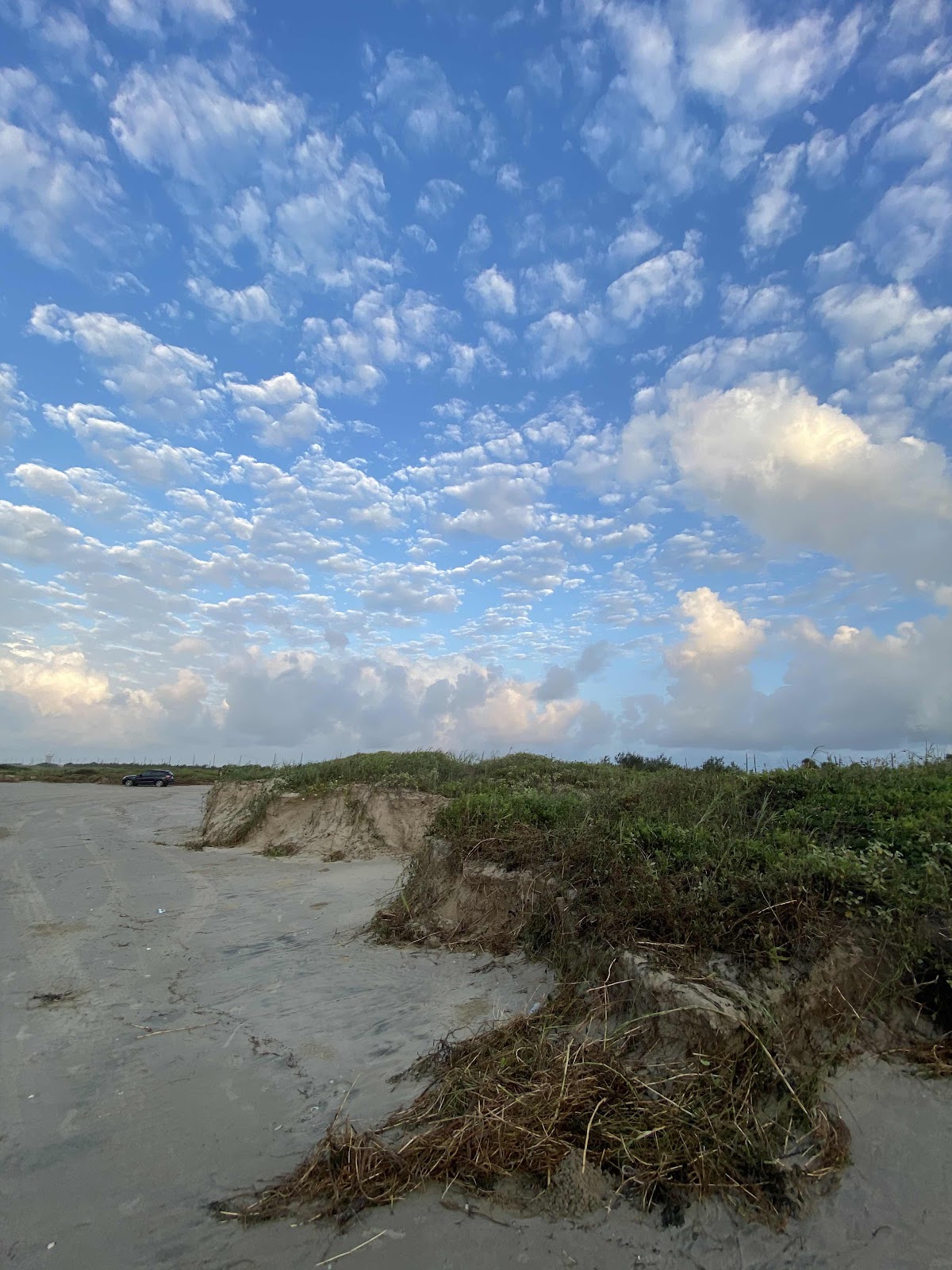 For the rest of the day, we went home and finished the hurricane prep tear down.
All photos were taken with an iPhone 11, which I'll be using often.
Laters...have a great weekend!!!!
Email Post
Labels: Beach cats Hurricane iPhone 11 pandemic 2020