HJR-6 was passed in 2011 but HJR-6 must pass through the House and Senate again in 2013. If it passes, unaltered, it will be on the ballot in 2014. This means that Hoosiers will cast their vote either for or against HJR-6 as a referendum.  In other words...as an amendment to Indiana’s constitution.
The bill reads:
“Only a marriage between one (1) man and one (1) woman shall be valid or recognized as a marriage in Indiana.  A legal status identical or substantially similar to that of marriage for unmarried individuals shall not be valid or recognized.”
The result would be, depending on the wording:
Prevent any future attempts to allow for same-sex marriage
Eliminate health care benefits for same-sex partnerships
Eliminate legally binding documents for same-sex couples that are “substantially similar to marriage” such as wills and trusts
Eliminate inheritance laws from being applied to same-sex couples
Eliminate hospital visitation rights 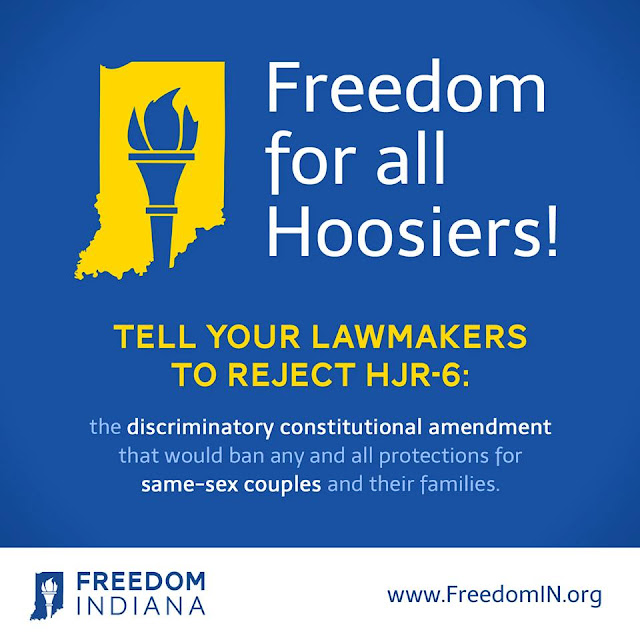 I find this piece of legislation vile because of the obvious blatant disregard of human rights.  This type of discrimination has been found repugnant to the United States Constitution.
I also believe that this would have an economic impact on my state.  Both Lilly and Cummins have opposed the ban on same sex marriage because of the impact on their employees.  It also has an impact hiring the best and the brightest to many of future positions.
It also has a huge impact on economic development for the the state.  Companies that might entertain opening offices or hubs in Indiana would have to think long and hard. How will it retain it's white-collar workforce?   Why would a business, with a national or international platform want to come to an area that promotes bias and discrimination? Just because it might be OK locally, doesn't mean that it's OK in other parts of the US.


The worst is…it writes blatant discrimination into my state’s bill of rights and constitution.  Huh…this is being billed as anti-freedom…to me, it’s anti-human.
Rant over but not forgotten.
~Moon
Email Post
Labels: HJR-6 Rant