It's been a BUSY week...New Sketchbook Pages 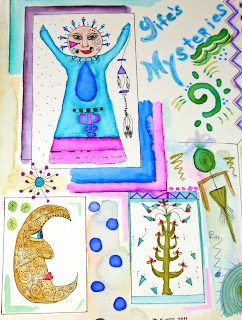 During my tooth extraction down time, I spent some of it drawing and painting.  I was a bit grumpy...the lack of 'real' food was getting to me. 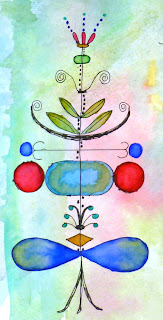 The below is in a new Moleskine...these are wonderful.  Watercolor glides on but they are still smooth enough for pen & ink washes.  I also like the cream color instead of the bright white.

I spent over two hours last Thursday evening in the ER with Bob.  He was cutting a squash of all things and ended up with five stitches in his left thumb.

I had almost forgotten just how sad an ER can be.  So I mostly tried not to listen to other families and work on my sketchbook.  A few people were interested in what I was doing, but only one came over to chat.

The below reflects time...plus a sun dial that I saw in Plainfield.  Some of the sketches I might put to a larger piece.  I like doing the composite type of work.  I didn't think I would but...

Saturday was a beautiful day...it was 70 degrees with a cloudless sky.  So Bob (with is pulled hamstring from last week and his stitched up thumb) went to University of Indianapolis' campus....for a little while.  Bob was beginning to limp within an hour but his newphew offered up lunch.

This was a quicky pen sketch that I later added some watercolor.  That red tailed hawk landed in a tree within 20 feet of the back deck and sat and sat and sat there.  If not, I wouldn't of gotten much details.  For a while, I was wondering if he/she was ever going to leave.  They normally don't do that.  Maybe it was wondering if it could eat Briggs, the wonder Sheltie, or not. 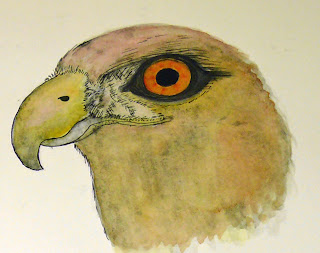 Ok...I'm off to study for my driver's test.  Yeah...it's that time.  It expires this week.  You ask why...well, if you move to Indiana, you have to take the written test.  So, lets hope that I pass it.  I'm pretty sure that I will.