This series started with a spark of an idea…then I read though Michael Barley’s Baleen tutorial…then I pondered some more…then on March 24th, it happened. All the pieces fell into place. So the birth of this series is also Harry Houdini’s birthday (March 24, 1874 – October 31, 1926)…hence the name, Escapes. To make it more interesting…regarding color combos…I enlisted the help of a globe. I spin the globe, close my eyes, and pick a spot on Earth. Then figure out what is in that area that interests me.
What this all boils down to…is when you have made as many beads that I have in the last decade, it’s good to still have fun with the creative process.
The global pick…drum roll…is Venice, Italy.... 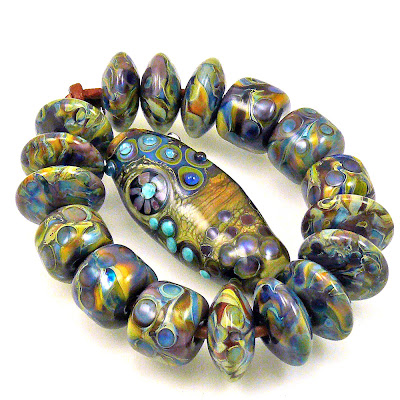 When I think of , I think of canals in the late evening with the play of shadows and lights from the city on the water.  Italian renaissance is rich in history and art but it’s the little things that intrigue me.
Anyway...the set is highlighted with Double Helix's Psyche.  Yeah, there's some oil slick sheen that I couldn't get the camera to pick up but...Psyche does other things than just the typical silvered glass.
Yeah, if you cycle the bead though a O2 flame then an light reduction flame, then repeat a couple of times...poof...you get oil slick hues.  Yep, it's pretty but its not the look I was going for.  Psyche also other kewl stuff too...like it fumes the glass around it...it can be layed in clear for a lovely shade of purple...it creates glass reactions that I can't get with other glasses and it doesn't react with other glasses...it also reacts well with Double Helix's RE391, a clear catalyst...plus it doesn't pit like some of the other silvered glasses (depending on the batch).
Glass used: Psyche, River Rock, CiM Celadon Unique, Opal Yellow, DH Gaia, DH Aether, DH RE391, Lauscha Clear, CiM Thai Orchid, and Reichenbach Multicolor.
I've got a handful of these type of sets...focals with accent beads, that I will be photographing this week for Etsy.  Some are larger (necklace, bracelet, & earrings) and several are smaller.  It depended on my mood but most are very organic and will mix well with natural stones.