New Lampwork, beyond the Beta version...and Changes in the wind…price increases 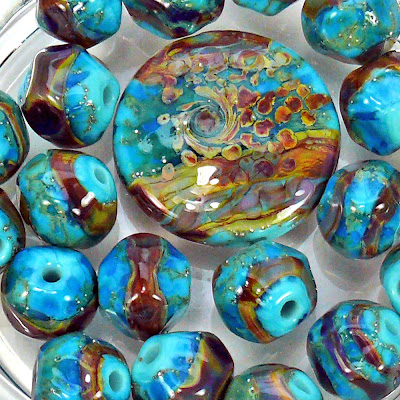 The above is a new set...beyond the Beta version of Mooner's Rock series.  I will keep making the old series...a lot of people like them plus they are cheap.  Or should I say, affordable. :-)  There really isn't that much to them and I don't use the more expensive glasses on them.

I did get a bit bored with making them but they are just so many different options for a jewelry designer.  So I kept the same shape and added a lot of extras...fine silver, frits, and raku.  I think the next version will also include fumed beads.  They are just so easy to design with...they work so well with natual stones and metals.  So it's going to be hard for me to stop making them.

Changes in the wind…
I think (just my opinion) that there is a change in store for several of the creative arts. The areas that I understand, are clay, paint, and glass. Mostly in the prices of raw materials. There are several rare earth minerals that are used, like Erbium…my pink of choice, a rich cranberry, uses such rare earth mineral. For example, I have a several rods of cranberry that I paid $36-39 a pound. I went to replace some of it last week and it’s now $85 per pound. Eye protection glasses for both soft and boro, utilizes a rare earth mineral/oxides. Lanthanum is used in both lampworking glass and ceramics glazes. So is thulium, in glass and ceramics. I’m just beginning to do the research on this tangent but I see the prices go sky high soon.

For example, when I started making jewelry full time, the price of silver was running about $3 a troy ounce, currently it is $29.88. So I’m betting that the same thing is going to happen to many of my raw materials that I’m currently using in both painting and glass. I knew it was only a matter of time.

Now what does all of that mean…I’m not fully sure yet. I do know that I will in the process of figuring out how to keep my costs down…but I’ve already taken it to the bare bones a couple of years ago. So I really don’t have many frills left to cut. I also buy in bulk as much as possible, which I will keep on doing. So bulk purchases and cutting frills several years ago is the reason why I haven’t had to raise any of my prices in the past 4-5 years.

So if you have any ideas on how to keep costs down, please pass them along.

The thing is, I’m above average lampworker, not one of the great ones mind you…but….many of the more interesting beads, you don’t see. They mostly sit on my desk because of the price I have to charge for them. I’ve found myself ‘dumbing down’ my work to stay within the confines of what the market will bear.

So all of this has me pondering...what is in the future for the arts?    Or is just me?

Anyway.... will leave you with those questions, if you decided to read this far. :-)