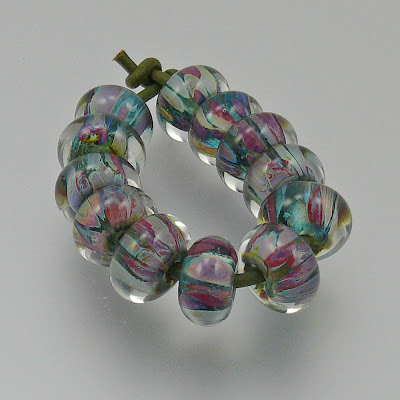 The above and below pics are the same bead set.  The above was photographed inside, within a EZ cube and sparkle lighting.  The below was photographed outside, in muted sun, on a piece of white matt board (what I use to matt my watercolors).   The details have been blown up because the actual size of each bead averages 7.5mm by 13mm.  The background makes a huge difference in what the beads look like in reality.   In hand, they actually look some where in between the two photos.,.but...if I add any light or companion beads like sterling or a gemstone, that will change the colors as well.  I think it has a lot to do with the encasement and the properties of silvered glass. 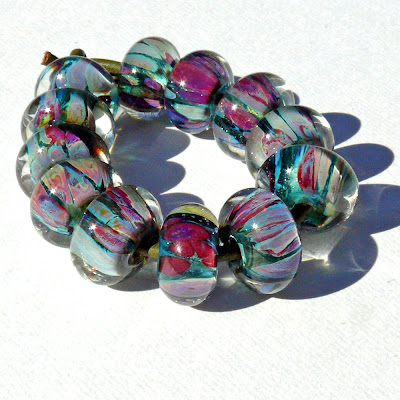 I spent 8 hours yesterday working on photos and I only have 19 sets ready to go.  So my decision is to try to do both in studio and outside photos....more so when it's silvered glass, fumed, or encasements.   The opaque beady sets really about about the same in either light or most backgrounds.  The colors really don't changed much.   So I could photograph those sets on rainy or cold days that I don't want to do outside photos.

Jewelry, that includes shiny sterling, really needs to be photographed inside.  I think that has to do with my meager photography skills.

Now what does all this have to do with beady sets???  The thing is, the one thing that I dislike the most (about buying online) is that there have been times that I've purchased beads in a certain hue and they weren't when I opened the package.   That has to also with monitors too but it also has to to with backgrounds as well...plus lighting...plus a few other things too complex for my merge Photoshop skills. :-)

Anyway, to make this ramble shorter...I'm going to try to do both inside and outside photos for certain types of glass.  It might take a bit longer but I'm betting that my customers would prefer it.   I also will try to make sure that I have 5 views as well. 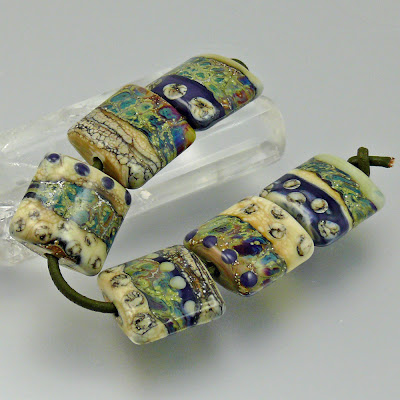 These are also part of the silvered glass that I've been playing with.  The beads have both American silvered glass and fine silver.  I didn't think they would turn out as well as they did when I was torching them...but...when I opened the kiln, I was surprised.  The Double Helix that I used is one of the kiln striking kinds. 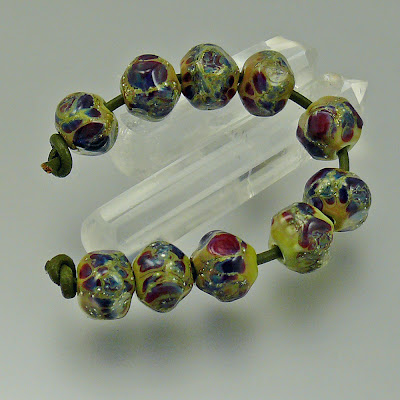 I've kinda stayed away from encasing silvered glass.  For one, there's a lot of lampworkers that already do that.  The main reason is that I couldn't figure out how to photograph the sets.  Since I kinda have that down, I will do some more.   Previously, I just kept them and made jewelry from them. :-)
This year, eclectic natural/tribal jewelry is very popular. It really never goes out of style but for the next couple of years, it's gonna be hot.  That's were the more organic lampwork seems to really shine in jewelry designs.  So maybe it's encased silvered glass that I shape into rocks. :-)
I've rambled enough...I'm off to get some work done.
Have a happy, creative day!
~Moon
Email Post
Labels: experiments lampwork lampwork beads photograhpy silvered glass