I’m beginning to get my mojo back.  It’s frustrating some times because I have the sparks (ideas) but my hands wear out.  I’m approximately 3 months post surgery but full recovery takes up to a year.  Some people just pop back…my compression was severe with sudden onset.  That’s what I was told why the reason I’m not just popping back as quick as I thought I would.  Anyway, I have most of my grip and range of motion back.  The issues that I’m still having are intermittent numbness, hand fatigue, and pain.  When there’s a combo account of CTS and arthritis, it’s hard to distinguish which is which sometimes.  There are certain activities that really are a PITA…like driving a car or just being in a car, vacuuming, or using a dremel.   I’m thinking it a vibration thang.   Computer work also really bothers me but I’ve got to just get over it. 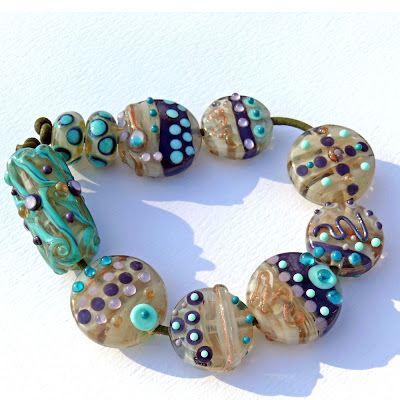 This all brings me to the reason why I had to make some decisions in my business. I’ve decided to keep making lampwork, I can’t give it up. I am giving up jewelry designing except for beady examples regarding the used of lampwork and chain making. Painting and 2-D mixed media has become a passion for me…there just isn’t enough time in the day to do it all. So jewelry is being placed on the backburner, at least for the time being.

The other thing that I’ve decided to do is leave the Murphy Art Center, where I have my studio inFountain Square.  Even though I am still paying for the studio, I’m not there. The bottom line there is that I don’t have enough electric juice for my needs. I’m now running with two oxycons and two kilns. My studio there can’t accommodate that…it barely accommodated one of each. The thing is, if I’m running a long day at the torch and I flip a breaker, I can don’t have a quick enough access to the panel. That pretty much means, that kiln full of beads is toast. I won’t sell those beads, they are just thrown away. Plus what it does to my equipment doesn’t make me happy. Anyway, I’ve moved my lampwork to the garage. We have plenty of juice there.

What does all of this have to do with you, the reader…well, it’s an update on myself. It’s also to let you know that I’m going to have a lot of ‘stuff’ on Etsy in the near future. I’m back in action again.  I will also be running jewelry and a focal sale.  So that means lots of photography time for me.