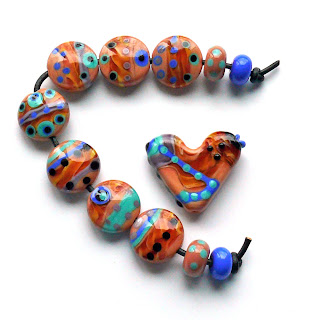 I stayed home AGAIN yesterday.  I told myself I needed to work on my photograph skills.  Which is true and it really was a good excuse to not go out in the snow.

Anyway...I've decided that the hard thing about beady photography is making sure that the colors of the bead set are the same in the pictures.  If I didn't have to do that...I think I'd be OK. LoL.  I am finding that certain backgrounds will change the tone of beads.  So I've been working on that whole angle as well.  The above and below are the same set...the colors are true tones...but the different backgrounds do make a bit of a difference. 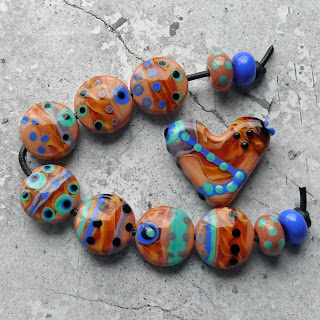 The below was an experiment...silvered glasses with fine silver.  I liked how they turned out, and they do look much better in hand than in the picture. 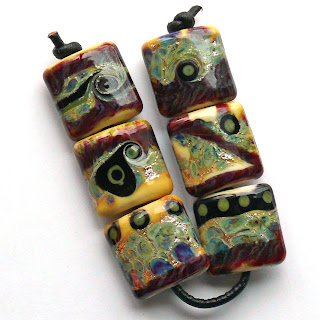 Here's another one of the silver on silver sets.  I will be doing more of these...they would combo well with natural stones and metals. 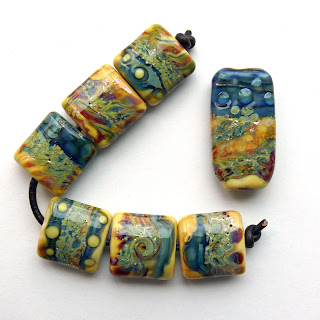 I've been working in glass for almost 10 years now...before that and during, I did make clay beads.  I was wondering just how many bead sets I've made.  Then I got thinking...maybe I just don't want to know. :-)  It is sometimes hard to come up with something new and different day after day.  That's also why I do a lot of mini series...everyonce in a while, I find something that just zings me.  I figure if it zings me, the jaded beady maker that I am, it will zing somebody else.  Right now, I'm on mission of making beads that mix well with natural stones.  Then I'm figuring I'll move one to brights for a while.

Time to get my day started...I'm off to the studio, I'm going to brave the snow and cold!