Yesterday, I spent my day working with silvered glass.  I was in Mad Scientist mode.  I'll have pictures tommorrow, if the beady dudes are presentable. :-)   The below set is from a couple of weeks ago...just small bit of silvered glass, can't remember what, that are encased.  Yeah, I really did work to get that color...it matches some stone beads in my stash. 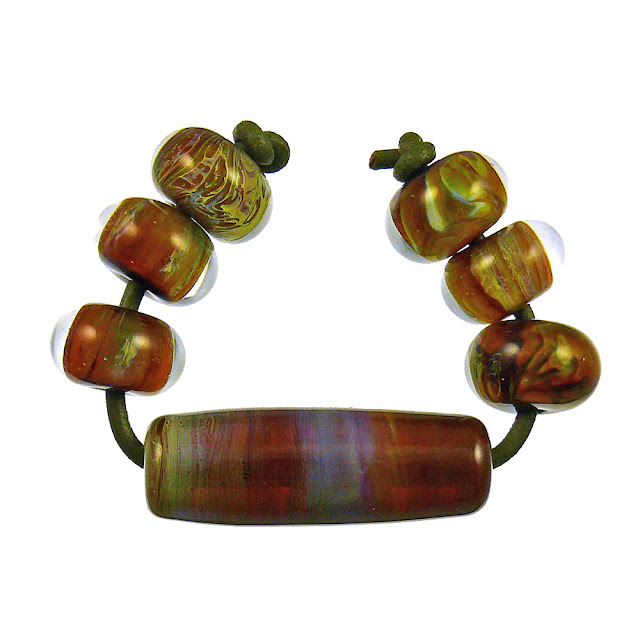 Yesterday, I was pondering what I need to get done in the next couple of weeks.  I've only got a couple shows left this year...plus to three local retail spots to keep filled.  Oh yeah, I need to make some window sparkles (a bit of lampwork, crystals, seed beads, and large tear drop glass thingies) for a mini gift shop on Dec 4th.   Mmmm....I think I said I'd also make small low end Christmas earrings too....I guess I better check on that.

Anyway, I was rambling a couple of days ago, on the direction of my business. Currently, I work a huge number of hours and I don't seems to have the time to do much. It's wearing me out. The point is, that I make jewelry from the ground up, I start with the basic raw materials of glass rods and sterling wire. My current designs showcase my beads, without much fu-fu. Everything is tagged, most clasps are handmade, even most of my earring wires, and most of my chain is hand forged by me as well. Plus I've added precious metal clay too.  Which makes the pieces a little higher end than what's typically out there currently. So I've had to cut back on the retail places and gift shops that display our work.  They just weren't selling...what I have isn't what they need. I've kinda out grown their customer base.

I was taking a good look at shows next year...thinking about a new display/booth set up...then that's when it hit me. I really need to pare down a bit. There's a good chance that we will be selling our house next year and moving AGAIN. (I really want to get out of Danville and live closer to inter-city...I'm just not the suburban type...cornfields and HS football isn't my thang...nothing wrong with it...it's just not me)

Geez, the bigger shows, I have to jury into the first quarter of 2010.  To have a big show scheduled in the same month that I'm either moving or packing up the house is a nightmare.  I've done it before and I really don't want to do it again.  That's as bad as moving the studio at the same time as a big show...I did that last year. I still have flash backs and cringe.  Yeah, I think I will still do Broadripple and maybe a few smaller shows that I get to see friends but not very many.

Then I got thinking about first couple of years we moved to Austin.  Bob was doing a lot of traveling then, will be again soon, and how much time I spent on the torch.  That was over five years ago and I haven't done much in the way of experimention or pushing much on my skill base. I've been doing a lot of the same ol', same ol',  There's been a huge amount of new glass out there...new toys...new colors...NEW SILVERED GLASS that I've been wanting to work with.  Then there's the more simple of things, I even haven't blown shards.  I don't have the time.  So I'm taking the time.

Now this is all taking place during a time period that I've had local interviews, in the process of several publications that will be out in summer...you get the point and it's mostly about the jewelry. Not about the beads as much.

Anyway, after spending the last 6 months, creating mostly jewelry with lampwork.  I've made a few changes in my bead shapes and sizes....yeah, I still do a lot of the same ol' too.  I am going to do more focals...a lot more focals...more earring strands...more multi-shaped strands...more barrels and fat disks...and a lot more encased rounds.   That is what sells for me....oh yeah, more 'rock' shaped.  Anyway, I'll be back on Etsy in a couple of weeks.

So do ya think I'm crazy or what?