Napping on the job...bead pictures...Chit Chat on Fountain Square and the Arts

Yesterday…I had the greatest intentions of going into the studio. I got in the car…then poof, I was at the grocery. After that, I started looking around the house…well, it was Domestic Goddess day. I lasted for a couple of hours while Bob did laundry. Then I moved upstairs. The bed seemed lonely, so I took a nap. When I woke up…I was a bit disoriented. I was having dreams of being at the torch…this is kinda freaky…and thought my studio looked a lot like my bedroom. I did take some time to play with Photoshop Elements and some camera settings. 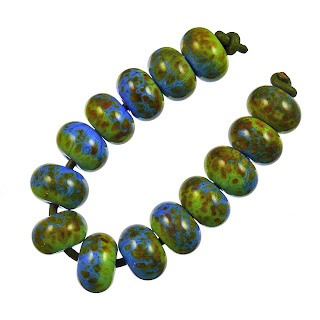 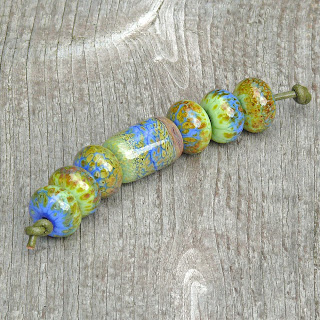 Currently I have piles of beads at the studio. I really need to get back on Etsy, I just haven't had the time to get them photographed and up loaded.  I'm just about done with my 'season' and will start getting all that done soon.

Oh yeah...I got a mini blub in the Indianapolis Star yesterday.  There was a Indy Star feature regarding Fountain Square. Ya know, most cities have a major artzy district.  Indianapolis, for it's size, really doesn't except for Fountain Square.  FS is just really coming in to it's own....the potential is there.  Yeah, I've had a bunch of folks tell me that Broadripple and/or Mass Ave is the artzy area.  Same with Irvington...don't get me wrong, I love Irvington but it's not a meca of artist studios...it's historical and a very friendly neighborhood, it has an 'art' center but not studio spaces.   Broadripple's time is gone...it sold out to bars and chow spots. It’s almost the same with Mass Ave...yeah there’s a few folks still there but most artists I know can’t afford it.
That’s the cycle…it’s called the Bohemian Principle. A community that has diverse population and cheap rent, will be invaded by a bunch of artist/creative types….give it a few years or a decade (or two), then poof…it can rejuvenate a community. It drives up the real estate values. Studio space equals economic development.  That's what starts the ball rolling.

Not only just the local neighborhood but it helps the entire city as a whole.  Yeah, Indianapolis has sports, I mean it's got SPORTS ; it's even home to Super Bowl 2012 but it needs balance. Tourists like to visit other parts of the city as well, not just Lucas Oil Stadium.  Go Team Culture...interesting article in the Washingtion Post on this topic.  Oh yeah, it has art attractions too...it's also got a large number of art organizations...but it doesn't have much of a focus on individual artists.   For interesting reading, take a peep at LINC's Artist User Data Guide.

Now take this with a grain of salt...we have only been back from Austin, Texas for a little more than a year.  I might be looking though jaded eyes.  I see Austin as a creative city...I still kinda wonder about Indianapolis.   What I'm seeing is that the art community in Indianapolis is still very fragmented...every one going off to do their thang.  Which is great but that was happening before we moved to Texas.  We move back and it's the same thing.  It really didn't grow and mature, just the names changed.  There really isn't one strong, well organized, individual artist focused organization.  Or maybe...the bread crumbs on the black and white checker brick road hasn't lead me to my final destination yet.

It's hard for me to bitch about an issue when I don't have the time to figure out how to fix it. Time is the key.  After being gone for a while, I'm more focused on change but it takes a huge amount of time and effort to make those changes.  Anyway, that's a whole different tanget.

Now...well, it up the the locals to support the Fountain Square area and...on the other hand, it's also up to the artists too.  Anyway, Fountain Square and the Murphy Art Center has gotten a HUGE amount of press the last couple of months...Nuvo...Urban Times...IBJ...of course there's the Indianapolis Star, Indianapolis Monthy, and several smaller papers....plus all the online bloggers. :-)

So if you get the chance...December's First Friday at the Murphy should be a blast with iMOCA and the new owers,  of the Murphy being around.

I'm off my chatty mode.