I’m still playing with Photoshop Elements 8…it’s not that much different than version 6 but enough that I really have to work with it some more.

I’ve got something else I’ve got to work on too. I’m still having issues with my ventilation system at the studio. I’ve got a 10 inch diameter run that connects to an 8 inch hole then connects to a 6 inch cap. We had a hole drilled though 18 inches of brick. I’m going to work on the air flow again today. I think what is happening is that we don’t have enough fresh air coming in or I’ve got the air flow pattern off some how. I’ve never had this problem before but I’ve always had windows before too. So…it’s back to the drawing board. It doesn’t happen all the time…so it also might be that I’m getting wind whipping around of the corner of the building; that slams the outgoing exhaust. Yeah, I’ve got the studio door open…I’ve got fans coming in from three different directions…yeah, I’ve adjusted the hood position…I’ve even added inline fans. This is a total PITA.  Why me?

I’ve asked to be added to the list for a window studio. I think that might help. I also going to have to make a trip to the roof to see if the outside flap is working or not. That might be it, I doubt it though but it’s worth checking again. I think it has more to do with the position/outside location. If that’s it…damn, there’s only so many holes I can make in somebody else building. :-)  I guess it wouldn't be so bad but the wall is 18 inches thick...in layers of brick...and make a HUGE mess.  I'm still finding brick dust from the first hole. 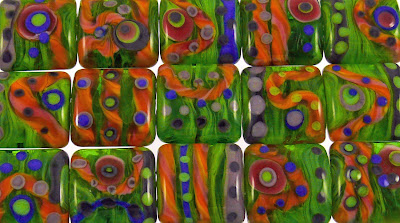 I have been on the torch a little bit...I decided to work on the Color Gizmo series.  At least that perks me up.