I'm sure all of you are a bit weary of me complaining about winter...so I'll keep it short It's snowing again...nothing like the last time but I still haven't recovered from the last one. Ok...I'm done.
.
Now for the beads. The below set is a new design I've been working on. I've made mostly focals from the design...mainly because they work up so well within jewelry designs. They take forever to prep for torching them...I mean I have to handmake the murrini, then all the twisties, and then all the stringers. Then I had to test the murrini and stringers. Some were made with some of the softer, spreading glasses like yellow opal or lavender. (BTW rubino, plain ol' white, and EDP are also some of the softer glasses...plus if you use any of the 'spreadables', the patels bases can make them even more watery....enough of the glass lesson, I'm sure that most folks really could care less.)
.
Anyway, after finding the right combo so that it didn't look like a gremlin in a blender, I made beads. I liked the below combo so well, I make a set of beads. The base is a pale light brown that worked totally fab. I love the glass, it melts smooth as butter but now drippy. 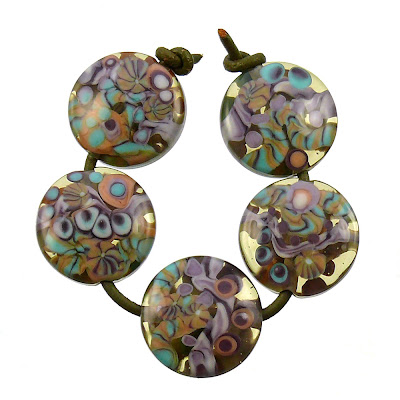 The below has a base of an odd lot (you know me and odd lots) veiled 104 COE blue. This is one of those glasses that almost as $$$ as silvered glass. $44 pound I think is a bit much but it makes lovely beads. I hurried up and ordered another pound of it and another one called Kiwi before they were gone. Both look much better in hand that the pics. The camera just doesn't do the glass justice. Even though I love the glass...and will use it to make jewelry from the beads...I doubt I would recommend it being used for jury pics. It's a type of glass that really needs to be seen in person...great beads for jewelry for shows though. If you click on the photo...you'll get the point. 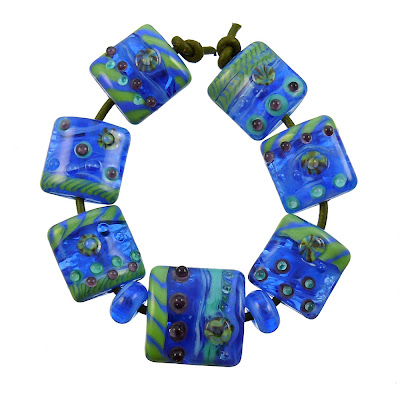 I got on a roll when making the below bead set...I spent an entire torch session on this color scheme. I even kept a few of these beady babies for myself. 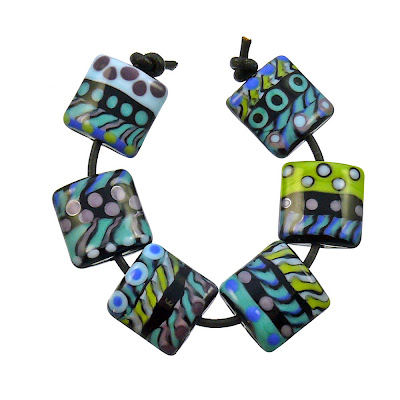 Ok...it's time for me to get some work done. I've got a major pile of beads to clean...I really need a studio Elf...that or a Fairy Godmother that likes to clean beads. :-) Now the reality is I really just want to sit by the fireplace and read a book. It's becoming harder and harder to work in that chilly garage. I also have the urge to play with some metal again...but I'm already in the process of packing up the stuff in that area of the studio.
.
I also should be making jewelry...I've got another trunk show the first weekend in March and I am SOOOOO not ready. Bob and I are doing this one together...and he's much more prepared that I am.
.
Decisions...decisions...decisions...
.
Same bat time...same bat place...
~Moon
Email Post
Labels: chit-chat glass issues New lampwork odd lots