My recent experiments at the torch haven't come out the best in the world, a few have. So you don't get to see those beads that didn't. Have you ever thought of how many beads that are made and nobody ever sees? It's a lot. Every time I get new glass in...I play with. I see what it will mix with, feel out how it moves, and even make a few tester beads.

Now the experiments that did turn out...yeppers....they are cool. Lots of color with lots of enamels and surface drama. I am going to keep working on them until I figure out how to get good, consistent sets. (then you will get some pics) I'm mixing enamels...if I was making focals, it wouldn't be a big deal. But making sets, I want to make sure that all the colors that I'm using are the same though out the set.

The below is an experiment that I will focus on later...window beads. I loved how this one turned out...but I don't think I've fully developed the concept yet. With the colors of turquoise and black, I liked the KISS concept. Some of the others...well, they are much more fluffy.

I've also been toying with the lap idea. We have a lot of stone cutting equipment...ya know like grinders, saws, polishers...that kind of stuff. I've seen a lot of work that is being made by lampworkers using this type of equipment. I've seen lovely work coming from lap folks too. Glass and stone really aren't THAT different is many ways. The issue is the cost of time that goes into these beads. Then that is added to the price of the bead. Where is that I would enjoy the making...I'm not sure that I would like the selling of these beads. :-) OH well, that's a call that I will make later. Right now, until I move the studios...I am stay with the KISS method for a while. I've already got too many irons in the fire. 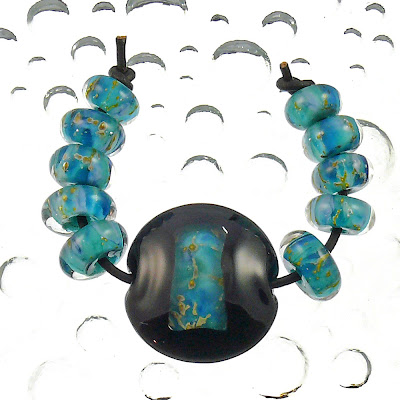 Ok...what do you think of these? I must be one of the few people that really like encasements. Believe it or not...sometimes it can be a simple process. That's once I figure out what colors and glasses work with each other. Again, you don't see all the test beads nor the melt downs. :-)

I've had a couple folks ask me why I make so many different types of beads...why don't I have a signature type of bead? Well if I only made signature beads, I'd get bored. I also would get tired of making jewelry from the same types of beads. I think it comes down to that I'm a metalsmith at heart and jewelry designer that happens to create lampwork. There will come a time that I will walk away from lampworking and move to something else. I've even had thoughts of going back to pottery. I've even entertained thoughts of going back to beadweaving.

Back to beads and lampworking...I do get on jags...like Color Gizmos or encasements or any type of series. That jag will last for a while, then I move on. Right now, in between experiments...it's encasements. 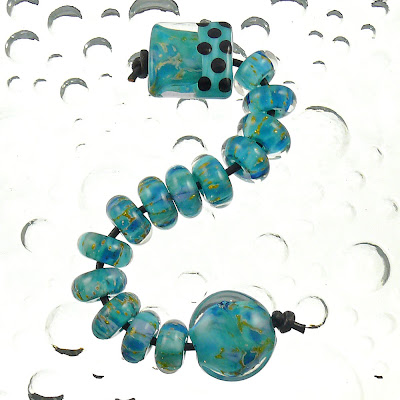 I've got a lot of stuff to get done. Today it's uploading sets on Etsy...answering emails (the spam monster is visiting again)...cleaning the house. Geez, I love my cats but hate the catbox. Oh well, I can't have everything.