We finally got dug out. It snowed over a foot in our area...yippy. The drive way and walks have been cleared of the white stuff. The below is a semi-covered area on the back of the house. I have had enough...I no longer miss the 4 seasons. I can go back to our regular scheduled weather now. More like the weather I want...no snow, lots of sunshine, and nothing under 40 degrees. Just who did I piss off...this is the 6th largest snow fall in Indiana history. Why me? 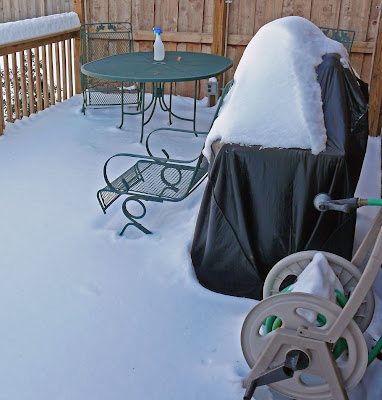 I have to admit that these ice icicles are kewl. They are all over the place. The sun is shinning though this one. In person, it looks like a squid. Now on the other hand...we have dug out from the snow...now the ice has begun. All the walk ways are solid ice currently....then it melts again by late afternoon...then it's ice in the evening. I'm sure you all know the cycle...it's like the Snow Queen having hot flashes.

Well, I just gave up and made beads. Here's a sample of barrels. This is an OK pic but they are kewler than kewl in the hand. I have a huge amount of troubles when I try to work with greens in jewelry. So they have several different hues without being overpowering. On top of that, they turned out exactly the way I wanted them. Yeah, surprises are great but sometimes, I like things to go according to plan. Some of the below will be up on Etsy next week or so but some of them...I think I'll keep. They are totally fab as accents in bracelets...make great tassels...or combo pendants. They aren't very large, mongo beads either. Some of the strands will be 12mm X 14mm and other will be 10mm X 13mm. It's the shape that works so well within jewelry designs. 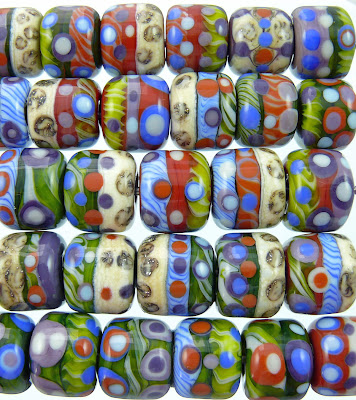 This morning...as I was trying to make the bed...I was invaded. I just got the duvet on and poof...the furballs were staking out claim. As you see, Mouse got the sunny spot. Nox and Sugie are cuddling...more for warmth than anything else. It's not like they are really buddies or anything. 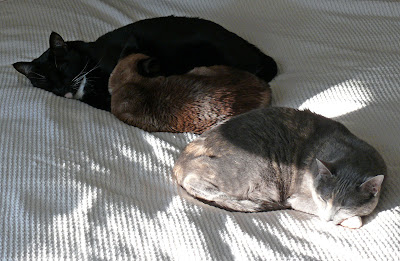 Now we come to the MOUSE. I had a huge pile of lampwork beads, stone, and metal beads on my design bench. The pile was there a couple days ago. The morning, all the lampwork seems to be missing. The pile I have on the breakfast bar seems to be getting smaller and smaller. I make some decent size focals so I know they can't be easy for the furball thief to run off with them. She doesn't go outside and I've turned the house upside down to fine them. The only things that she steals is lampwork and earrings. 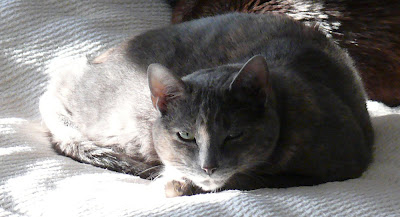 In person, she's a lovely cat...very talkie to me. She has been with us for almost 2 years and still doesn't like Bob. It's not that she afraid of him...she just lays her ears back and give him that 'try it, just try it...come on, just try to pet me and see what happens' looks. She not actively stalking him but she is overly friendly either. She was a feral rescue (Texas) and I've taken a lot of time with her...I'd say she's been abused and has previously been starved. Now, as you can see in the pic, she's healthy and plump. A bit plumper that I'd like but I think that she will slim down in the summer. Her fur has several layers to it and makes her look much larger than she is.
OK...I've got packages to get taken care of and back to the torch today. I'm going to try to get out of my addition. Me and ice really aren't compatible yet. Hopefully, I will get some pictures uploaded on Etsy. Both Etsy and my internet provider have been rather slow lately. I get to the point that it's just taking way too much time and do something else. Patience isn't one of my strong suits.
Stay warm!
~Moon
Email Post
Labels: cats chit-chat Mouse New lampwork