Here's some raku beads for your viewing pleasure. This is the 104 raku...it's a bit harder for me to get the colors with this raku but I was please with the results. They will make up into some lovely jewelry...that's why I like raku, it's the organic favor that goes well with natural stone. 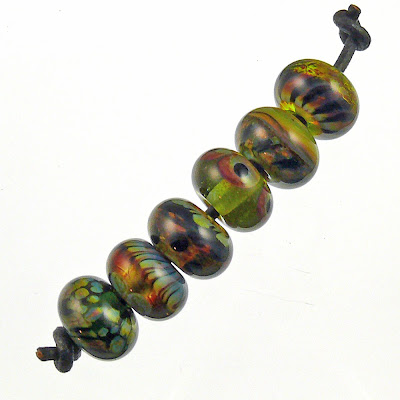 I got some pictures for ya...I finished them last week but just found them on my desk. I don't want to do a show and tell on what my desk looks like...but I'm not real organized right now. Mouse, the feral cat from Texas, went hunting on my desk. The last couple of days, around 3am or so, I'm awaken by odd noises in the house. Mostly coming from the office. I get up, search around the house, and nothing. Until the next morning...I see the office. OMGs, it now looks like a small hurricane went though the paperstacks...the beads are all over the place...the printer has even been moved around. Plus she's a little theif...I've found a couple of hidey holes of hers. Her favorite is earrings and smaller lampwork focals. She even has certain color perfances...blues and greens...plus anything encased. I guess those must bounce better. So I've got to get her more toys...maybe that will help. 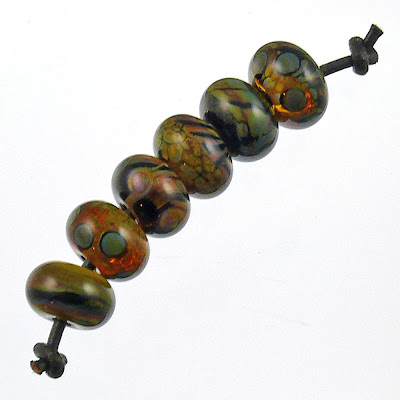 These raku sets were fine, just buried under paper and scotch tape wad. (Yeah, she likes tape too) Actually, it's kinda hard for a cat to hurt lampwork. There's not much they can do except hide the beads...most cats won't eat them. They aren't like dogs...geez, I've seen dogs eat rocks if food is dropped on them. Anyway, she didn't carry these beads off. Mostly likely, they were not in her color schemes. :-) 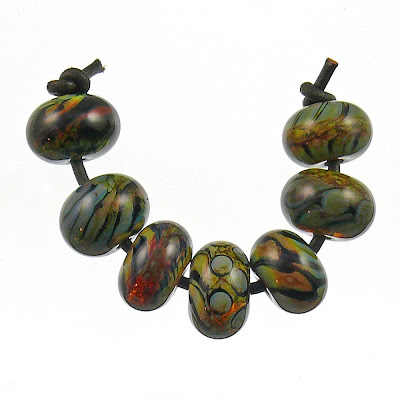 Now my issues with silvered glass...
I was on the torch yesterday for about 10 hours...I have nothing to show you for my efforts. Yeah, I do have some pretty beads...they are all encasements...which makes the colors pop but it hides the silvery sheen. It's the sheen that I like from silvered glass.
Plus...I'm not getting sets. That was the whole reason why I've been spending days on this experiment. I can get lovely focals but I can't get the color of the glass to behave well enough for me (if encased) to keep to the standard of my sets. I can't get the colors to merge into the patterns that I want...nor get the beads (for a set) to look more than OK together. That's just not good enough. So, I'm going to make focals and non-encased sets today. Maybe if I work the glass long enough, I figure out how to unlock the secrets. :-)
.
.
I've had a couple people ask me why I don't sell a lot of focals on Etsy. Well it's a time thang. By the time I take all the pictures and set up the listing, it's really not worth it. The sad thing is that I make some beautiful focals...it's just that I can't sell them for the time I have invested in them. So I either need to set focals in lots of three (or so)...or get quicker with the listings. Or do focals with a small set of accents. Got any ideas??? I also need the focals so sometimes it's hard for me to part with them. I thought about doing pendants instead. What do ya think?
.
.
I've decided to do the Danville Farmers Market this year. Yeah, I know if you are from a lot of places in the US, like the Midwest...you are saying WHAT????? A Farmers Market...oh Moon, you have got to be kidding. Nope, I'm not. :-) The thing is that if you are from places like Austin or Ogden City (Utah)...farmers markets and outdoor art markets go hand in hand. I've been to some in Washington...Colorado...Arizona.
.
.
So I thought, why not in Danville, Indiana? I'm willing to invest every Saturday from 7:30am to Noon from May to September to find out. If there's a enough interest, I'm willing to set up an Artist Market. Time will tell.
.
.
One of the main reasons why I'm doing this is to educate the locals. I say 'lampwork'...or 'flamework', I get 'uh?'. I say 'artist', they look at me with glazed lizard eyes...or give me a 'oh' look. So instead of wishing for change, I've decided to make a change happen.
.
.
See the thing is that the arts have a direct and tangible linkage to the local economy. I think that most governmental folks understand that...but the local citizens? Nah, I don't think so. Most folks that I've chatted with around here have no idea of the causal linkage between art and it's moola influence. :-) The thing is that if the locals can understand that the arts are crucial to attracting an educated/talented workforce...that the brain drain that is happening could lessen.
.
.
That whole concept of 'buy local' has a huge impact...that property values go up...that it makes the area much more attractive to an incoming business. That makes transplants like me want to stay. That makes students who go off to college want to come back. Most don't around here. Yes, it's a connect the dot sort of thinking.
.
.
Arts role in the local economy is significant. The rule of thumb is that for every $1 spent on the arts, $3-5 is spent in elsewhere in the community. That's in restaurants...the local businesses/shop...even the services like hair or tanning salons.
.
.
Well...that's enough chit-chat for me...
I'm off to the torch today.
~Moon
Email Post
Labels: chit-chat Danville IN experiments lampwork beads New lampwork