We are still in the process of getting everything done in the new house. Today...more tree people coming over for a quote. Bill, primo painter and handyman, is coming out to fix several things on the outside and hang a new screen door. Hey!!!!

Ike made his way up here yesterday...we've got several tree limbs down and some debris in the back yard. Plus a bit of fence damage. That was the remnants of Ike. So far, knock on wood, I've only been on the edges of one hurricane. That was enough. I sure hope all my friends down in Texas are OK. I haven't been able to get in touch with some of them. Bob has been in touch with his cousin down in Houston. He's out of power but only has trees down.

I'm still cleaning beads...it's a never ending process. I make...I have to clean them...then I have to get pictures of them. That's just the way it works.

As I recently said...I'm working on a new series. Here's two sets. The photos really aren't too bad but they are much nicer in the had. Lots a little details really don't get picked up by the camera. I kept the number of the beads low in these sets...that makes them very affordable for bracelets. There be some sets that are much larger...some with earring pairs...some with focals.

BTW, I got the new slim spree (straight sided lentil) focal in. It's about 32mm in diameter but super slim...it has all the canvas of a large bead without the weight. I've played with it several times...the shape is wonderful. I'll have some to show soon. 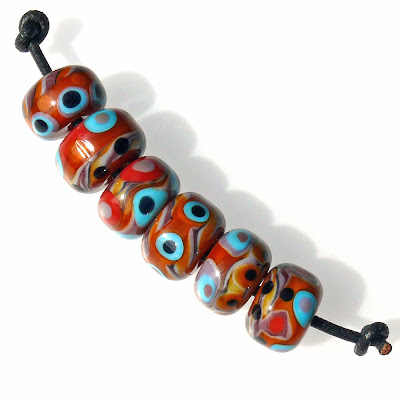 I liked how both of these turned out...the colors are similar and the style is the same. (duh) That does change but...these were the only two I had pictures of. The kiln is full with the same designs. 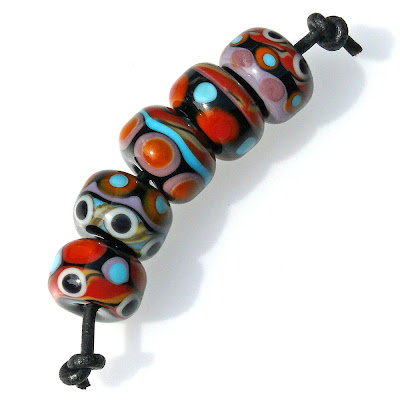 Today...it's gonna be the low 70's so I'm in the studio all day! I won't be posting any sets for a while on Etsy for a couple of days. I've decided that I need some sort of schedule. I haven't decided what it will be yet but posting sets on a daily basis plus all the packing plus doing all the paperwork is rapidly chewing away the time I have to spend making beads. I also do better with long bead making sessions...the glass flows better and I get into a zone.

So what I have been doing is trying to do both sides of the process in the same 24 hour day. So what happens is that I take care of all the posting and package packing...then I hit the studio. It's always the same...I think, oh just a few hours and I'll stop. NO way...that's not what happens....I work for a couple of hours and get into the ZONE. Then there's no stopping. I work until I just can't focus my eyes any longer. The end result is I'm not sleeping much. Ya know, I really am NOT a spring chicken any longer and I really need sleep.

Have a happy creative day!