Howdy Folks...I'm still alive and haven't been buried under the boxes yet.

I've been chatting about moving for a while now and I've had a couple of emails asking just how much stuff in the studio do I have. Well, here's a picture (below) of a very small area of stone beads. I have a grid work cage around two design desks. The grid panels are 2 ft by 6 ft. The entire cage is 8x8 and is way too small for me. On the other side is a wire area with a very small space. The metals are kept in drawers on the wall, so every time I want to add metals (which is very often)...I have to get up and fetch them. So if I get lazy or busy, there's normally large piles sterling sitting on the desks.

BTW, I'm sorting sterling this afternoon...again, after 20 years ...well, it's staggering. It's really overwhelming until I get started...then I get on a roll...then I start the Ziploc bag boogie and then it's more like a frenzy. :-)

The grids are a bit thinned out, I've been packing a lot of the stone beads already....but you get the idea. I have beads from floor to the top of the grids unless there is a desk or wall in the way. It got the to point that I even had to put up beads on the outside of my cage. 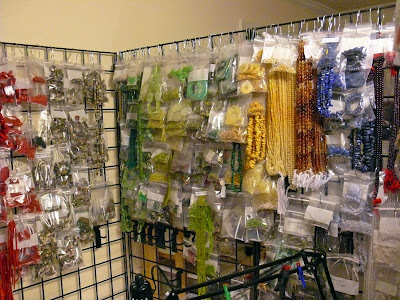 I'm also going though beads. Since I normally buy in bulks, I really don't need 50 strands of yellow jade or hessionite or whatever. So I will be doing a destashing on Etsy after I'm up and running again. 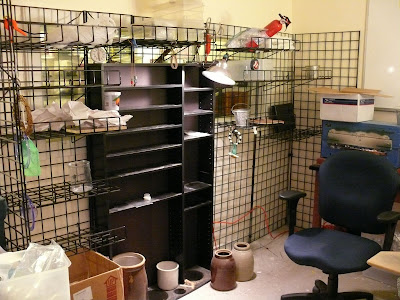 The lampworking area is just about packed...I've still got to tear down the grids, ventilation, and my bench. Plus pack the kilns....Yippy, now the cleaning starts.

The below is a pic that I snapped right after all the glass and frits were packed...each one of those larger boxes weigh over 50 pounds. I found several glass stashes I never knew I had. I found some old odd lots that I was thrilled to find...along with some silver-laden glasses that haven't been made for years. That's what I get for being a glass hoarder. :-) So you will be seeing some beads in a couple of months in some very different color combos. 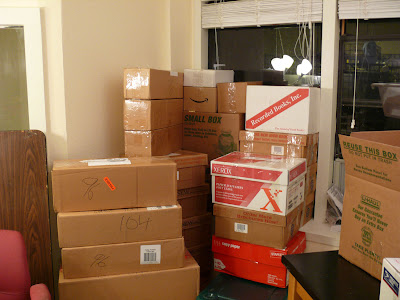 Remember yesterday, when I was talking about an 'everyday' jewelry line. Well here's a rough draft of earrings. Each of the larger sterling rings are soldered closed and the middle one free floats in the middle like a mobile. The look chunky but don't have the weight so they won't pull on your ears. The earring wires are what I had available...but the final will be handmade wire that have a coiled tube and has added crystals or pearls going up the front wire. 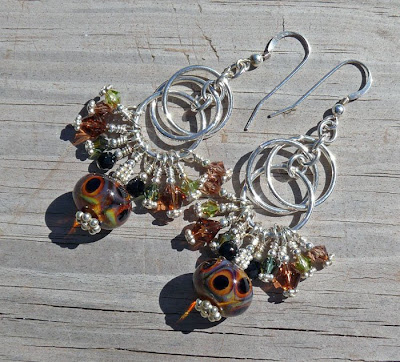 I've been making these type of earrings (below) for about 6 years or so but stopped after I saw the same design in an instructional mag. I decided to bring them back again. These again are just a very rough draft...geez, the earring wire don't even match. I'm thinking that I will make them from fine silver (PMC or Art Clay) maybe. I like the general shape because they are smooth lines and light, which makes them easy to wear everyday. 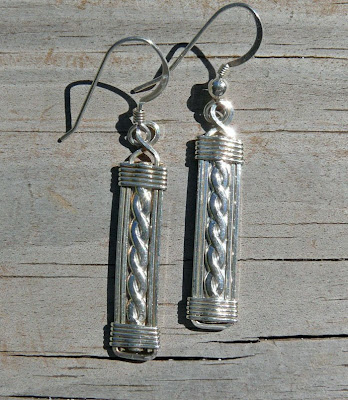 Here's another idea that I've been playing with for a while. They can be worn by themselves but what I'm wanting to use them for is lampwork beads. I'm getting a bit weary of seeing the same ol' headpin and bead earrings. So this is one of the designs that I came up with. These are large but I'll be making them in a huge number of sizes.
The problem with designing earrings is that if they are too simple, they are boring to me. If they are too complex yet visually interesting, they are too heavy to wear. So it's a balancing act. I'm not saying that simple and sweet isn't needed too. I wear them too but sometimes I like different and unique too.