I got a bit tired of the slow melting Kugler so I moved over to 104 COE for a bit. One of the main reasons why I don't completely move over to 96 COE is because of 'silvered ivory' and a few of the reactive glasses. If I could figure out how to duplicate this effect and a few of the other reaction, I would be a total 96 hope...but I just can't figure it out. For the life of me, I have spent hours upon hours trying to figure it out. I can duplicate American silver laden glasses' reactions (104) in 96, really small batches, but it can be done. (I stumbled upon it, it wasn't like it was a planned thang or anything.) I can even duplicate some of the reactions of a 104 COE glass called Hades; it's a black that if reduced slightly, will bring a metallic silver to the surface.

Anyway, I'm just a bit frustrated with figuring out how to pack all the glass that I have. I have odd lots, old lots, and a huge amount of dicro. I'm glad that I have all of it labeled or I'd be tearing up at the thought of packing it up. The problem isn't the types really, it's the amount of glass that I have. Just to give you an idea of what I'm dealing with....there's a local glass shop here in Austin, that has a booming business in lampwork supplies. I actually have more glass than they do. That's just in rods...that's not counting all the frit, the furnace glass, or the sheets of glass. OK...I'm done with the whining...here's the eye candy. :-) 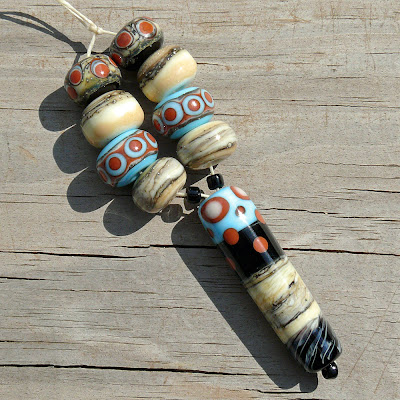 Yep, lots of silvered ivory...and my last little bit of odd/old lot red roof tile I had left. (don't get me started on the 'whys' that the Italians can't produce consistent colors of their basic colors...I think that Vetrofond just should give it up and do odd lots only...when they are selling for about $45 a pound, why not...oh well, such is life in the big glassy universe) 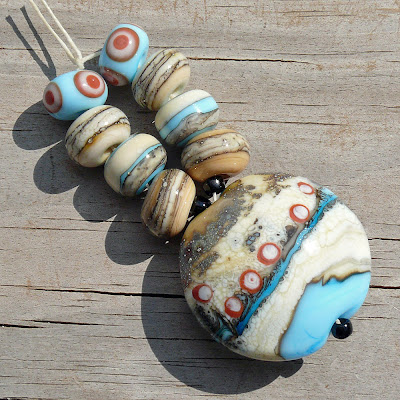 These did turn out well...I was a bit impressed with the beady dudes when I open the kiln. 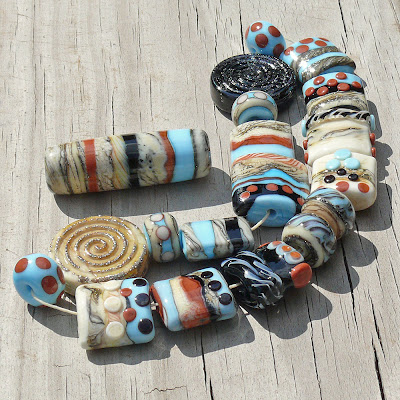 The below has lots of pairs for earrings...one of the biggie requests that I get. These will all be up on Etsy sometime the next couple of days. 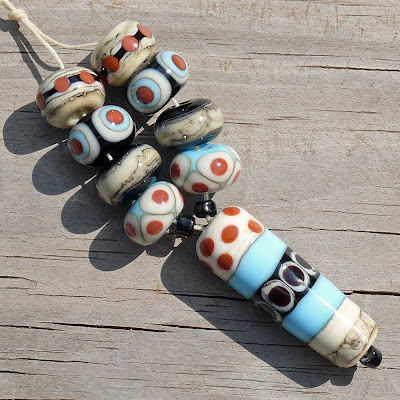 A couple of folks have asked me about "what do you mean, your backyard is a jungle?" Well, we currently live on over an acre in inner city Austin. Actually it is four building lots that have been put together. It's kinda odd but one lot has a recording studio that I currently use as my studio. Anyway, there is a huge deck in a 'L' shape that is attached to the house. One side of it looks like the below...to get a real good idea, click the on the picture. The bamboo leaves in real life are bout 5 inches long. 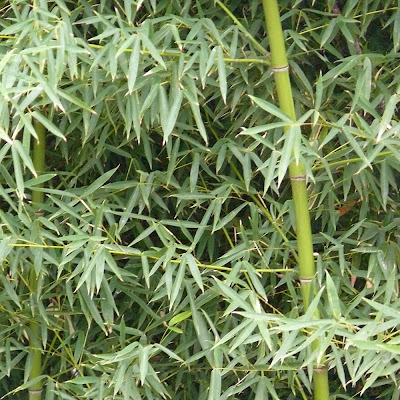 This is what I see from the back yard tree house/look-out tower/cool place under the trees...it's also about the same view from the master bedroom. The master bedroom has three sides of almost floor to ceiling windows that is surrounded by this stuff. We don't really need blinds on two sides. I wake up to GREEN every day...at night, I've woken up to a stray cat or opossum peeking in to. During the day, birds that make their nest in the bamboo, seem to always have something to say. The cats have a kitty condos in the windows...it seems to be one of their favorite places. 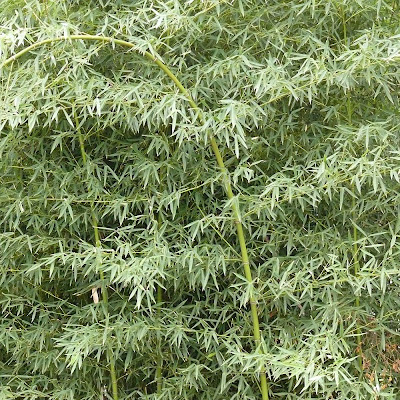 If you stand in my backyard, this is what you see all around the fence that surrounds the back yard. It might look kinda kewl but bamboo likes to take over the yard. When they say you have to beat it back, they aren't kidding. What isn't covered in bamboo is tree shaded. I do have to admit, that the bamboo does come in handy. My neighbors have issues with the deer grazing on their gardens. Me, there isn't a place in the back hard that gets enough sun to even think about garden. Even though the bamboo wall seems to keep the deer out. It does however encourage the squirrels and opossums. I've also got blue jays that are large as cats. Everything is big in Texas. :-) Since the dogs have passed away, the huge stone barbecue thingie...it's big as a kid's small playhouse, now has a opossum family that has moved in. The guy that mows our lawn now doesn't even pay attention to them.

Did ya know that opossums hiss at you if you get too close to them? Well, they do. They are also not afraid of me either. This whole thing about 'playing opossum' just doesn't happen with Texan opossums...they aren't afraid of shit. Most evenings, there is a opossum festival happening in the backyard. I'm pretty sure that the opossum population is the reason why most of my neighbors have dogs. We didn't have this problem when Yarrow was still with us.

These are the reasons why I looked for a house in the Midwest that didn't include a jungle in the back yard...lots and lots of windows...nor a total 'forest' type yard. I wanted a sunroom that actually would allow sun in...no snakes (we still have issues with copperheads and rattlers, at least we don't have coral snakes like some folks so around here) or deer...and a place that I could grow my roses and herbs. Also a place that the furry residents don't steal my wind chimes or stare into my windows at night. I wanted the bedroom to be on the second floor so that one of the bedrooms could be Bob's office...that means I can just shut the door, go downstairs, and go about my business without worrying that I'm disturbing a conference call or whatever.

We close on the house May 23rd. So now, the only thing that we are waiting on is a quote from the painters and when they can get it done. That will determine our move date but it's looking like sometime the middle of June...just before it gets boiling hot here in Austin. :-)

Today, I will finish up on my Focal Sale. I have 7 lots of threes left.

That's it for me today...I'm off to get packages out and start the uploading process on Etsy.