Between traffic, errands, and going to the airport...I still managed to get some beady photos done. It's been rather hectic around here. With moving companies dropping by for peeking at our stuff for moving quotes plus there's the yard stuff that has to be taken care of...then figuring out if we have enough kitty drugs (flea and heartworm preventive) until we move...then there is the closet cleaning...and the list goes on and on.

Mmmm...that reminds me of another thing to add on my "To Do" list...I need kitty downers. The last move we only had one cat, now it's three, and I didn't get the right dosage for Sugie. Geez, she didn't wake up for two days. I though I put her in a coma or something. So this time they all have to make a visit to the vet to get weighed the week before we take pack them up. I'm not going though that again. The other option is listening to three cats howling for 1100 miles. Mmmm...isn't that appealing??? I think by the time we got to Dallas, I'd be a madwoman.

If you ever decide on a cross country move, let me know. This will be my second in less than four years. I'd love to trade horror stories. :-) I have to admit that moving has changed my entire life. I was part of the human herd of pack rats grazing on the commercialism that feeds our economy. I used to consider shopping a sport. Now, I'm still part of the human herd but my motto is 'less is more. I figure if I don't want to pack it, I don't need it. 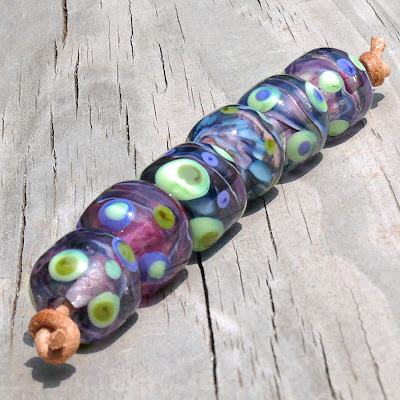 When I was packing up a carnival glass vase, I was really surprise just how kewl that glass is. The vase didn't get packed but I did get some beads torched. :-) 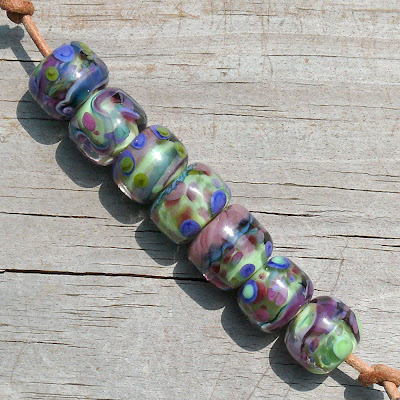 The above is in the same hues but I encased lime green first then added more color and encased again...the applied surface color. If you want to see the details, click on the picture. 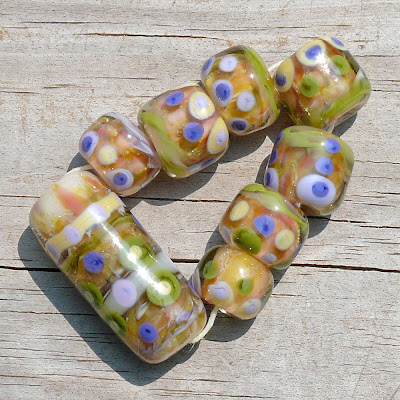 Doesn't the above have an English Garden favor...well with a bit of modern design on the side.

That's it for me!

Have a happy, creative day!!!!