I'm back home! We've been home for a week or so from our trip. I've finally got something to show ya'll. I've just been busy as a cat in heat...getting the studio organized to get moved. We were successful in finding a house. Now we are waiting for all the paperwork to finish up. I had forgotten just how much paperwork there is to buying a house. It's unbelievable. Plus being 1100 miles away doesn't help. Most things have to be done via phone, email, and fax. Which take more time. I just can't stop in to take care of things...I have to make calls, then leave a message, then we play phone tag. It's a bit frustrating. Oh well....we finish up the rest of the financing today, hopefully.

I wanted a historical home in Irvington...it's a small section on the east side of Indianapolis. What I picked out was a home in Danville, Indiana. Danville is a small town west of Indianapolis. The area has great shopping but the town is small enough to still have charm. The home is large enough for me to keep my studio at home but not so large that I spend all my time cleaning. That was the big challenge. The other challenge was to find a home that had a yard large enough for a dog but not so large that we spent huge amounts of time mowing lawns. I wanted the modern conveniences but I didn't want a new home...it's the mature trees that I wanted. This home will work for us.

I'm rather happy too that my entire studio will fit too. The sunroom will be my lampwork and glass studio. The dinning room will be my jewelry design area plus Bob gets an office that is separate from mine. The garage is heated and AC'ed so the slab and cab area can go there plus all the dirty parts of my studio. It's got water in the garage so that's nice too. I think it was the garage that really sold this house. :-) It's attached so don't have to go out in the weather to get to parts of my studio. Plus it has 3 bathrooms!!!! Yippy! Plus it has a wood burning fireplace in the family room. The fireplace was a really big deal to me. I've spent over three years in Texas and have gotten used to the weather. I'm figuring that the first winter in Indiana will make me a bit uncomfortable. I'm just not used to the cold.

I've had a studio separate from my home for years but this time I really wanted to have it at home. Right now, it's only a short walk to the studio but before that, it was always at least a 2o minute drive. Which doesn't sound like much but it can be as much as I work. The other thing is that I spend a nice chunk of money to have a studio and spend more time there than I do in my own home. When I got thinking about it, it seemed like a waste of money in some ways. I really don't need a house and a studio unless I could figure out how to combine it all together. Well, that's that up date of what has been happenin' with the house search. I'll have more later which all the paperwork gets sorted out.

So now I've been packing up some of the glass but mostly I've been cleaning out my stash. My stash constists of pieces and parts of odd lots glasses. Most of which haven't been made for years. When I first started lampworking, I bought out another lampworker that was giving up her studio. Some of those odd lots were almost a decade old. Which doesn't sound that big of a deal but it was. :-) Anyway, I found one rod of this blue grey color....shocky as all get out. I had to pre-heat it to the point of melting to keep it from shattering when it hit the flame. I don't think the color has been made for at least ten or so years. 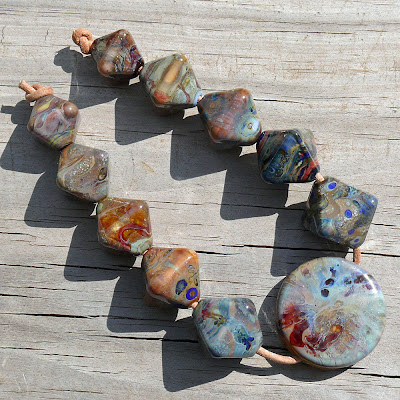 The above and below have been made from some 'found' odd lots from my stash. I put them up on Etsy yesterday...the above is already sold. 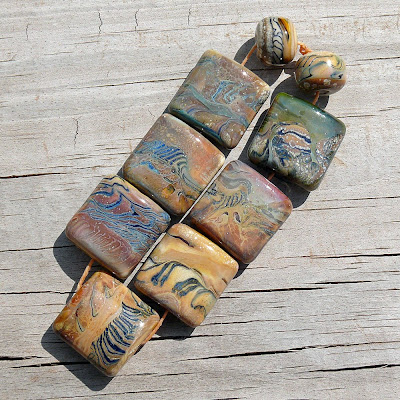 The below is lovely...there's a metallic sheen on them that rocks. It also went up on Etsy yesterday and has already sold. 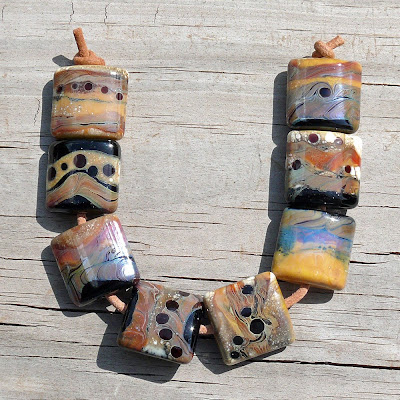 Here's what I call 'beggar' beads...they are all encased and in a large assorted hues. I make these type of strands for myself every once in a while. They make wonderful charm bracelets and treasure necklaces. I'll put this beady set up on Etsy today sometime. 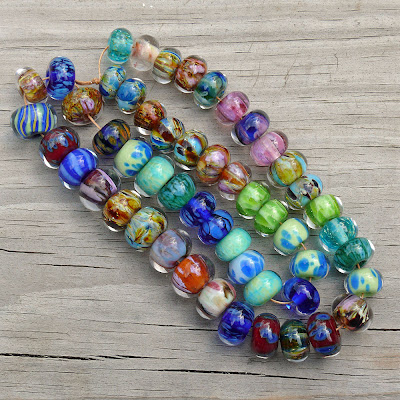 The below is almost all odd lots. I've got three mini sets that Ill be going up on Etsy soon. 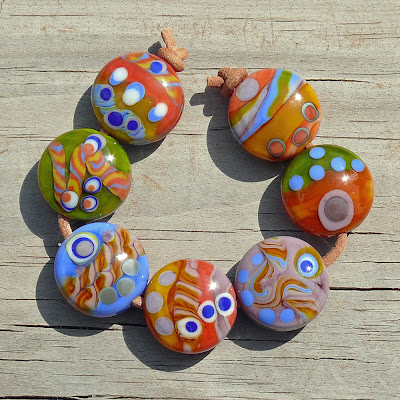 It's been a bit of a challenge making beads because I've got so much of the glass packed so I really have to be creative when it comes to color choices and use what I have on my table. I'm used to working with a huge number of colors and the colors that I want. That's also why I currently have a mess and a box of glass that I'm sorting though right now.