I'm back again with more beads...I bet that's a surprise. :-) Ya know, I wonder sometimes why anyone reads my blog. I have asked a couple people...they said it was for the beads (eye candy). I bet it's because of my smart ass comments. 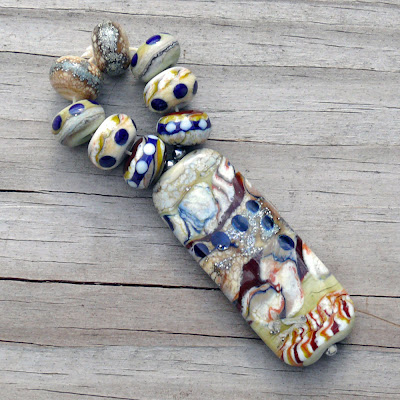 The above and below are from the same torch session....which are getting shorter as the lines at the post office get longer. These beady dudes will be going up on Etsy sometime tomorrow. 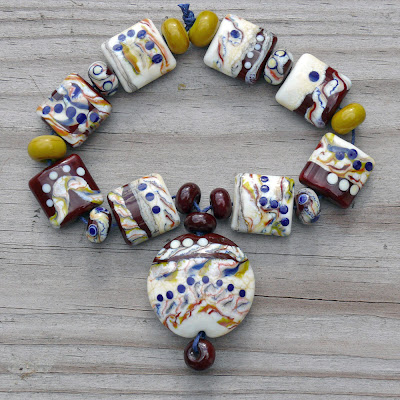 Today I had several International packages...so that means a trip to the ol'Post Office. Every time I walk in the place, there's something amuses taking place. Yeppers, I have nothing to do all day except people watch at the PO. Yeah right! Just because I'm on flex time doesn't mean I'm bored...I'm self-employed. :-) Think about that the next time you ask me to run your errands or pick up your kids from school. Actually I would do that, if you stand in line at the Post Office for me.

Anyway, sometimes you just have to wonder why people wear the things they do. I'm not the fashion Queen or anything so take this with a grain of salt. Nor am I a skinny mini that can walk around with very little on...but Austin does have it's share of faux pas happenin'. I swear one woman had SOOOOOOOO much Christmas apparel on, that I could of sworn that I heard "Jingle Bells". She looked like an upside down Christmas tree...she even little blinking lights on as a necklace.

Then there was the dude wearing house slippers and shorts. House slippers belong in the house, more so if they could be mistaken for stuffed animals or dog toys. I just wanted to tell him that no matter who told him that he looked good in those shorts, they were lying like a dog to him. There there was the chick (well I think she was female because I think there was boobage) wearing 6 shirts and two hats. Now that's a fashion statement.

I have to admit that there was one really funny situation happening in my line. A young mother was trying to humor her cranky toddler. It seems that the toddler just learned a new phase, "Merry Fucking Christmas" from somebody standing in line. The kid would yell that wonderful phase out as loud as he could and just laugh. Actually it was more of a high pitched screech. It got to the point I was laughing, then the guy next to me started laughing...then you could hear muffled laughter coming from the back of line. The laughter started to spread...maybe that's what Christmas should be about. A little laughter and cheer. :-)