I'm back again...yeppers...more lampwork pic. Don't ya get a bit bored with beady pictures? Hopefully I'll have something different in store soon. I've been at the torch but I've also been working on a lot of other stuff to.

I also want to thank everyone that has purchased beady dudes and cabs from the Etsy store. I've decided that I like Etsy much better than eBay. Once the software is much easier to use...plus the talent is totally awesome...plus I don't feel like I'm sell in a flea market. 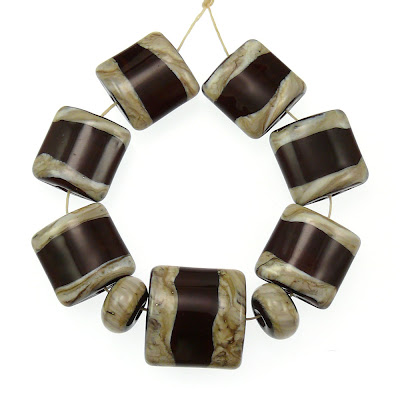 The above is a simple set but it goes with most natural stones. Makes for great accents beads...anyway, they have already been sold but I like them enough to post a pic of them. I have made some more in the same design but in different colors of glass. I will try to get them up on Etsy next week some time. 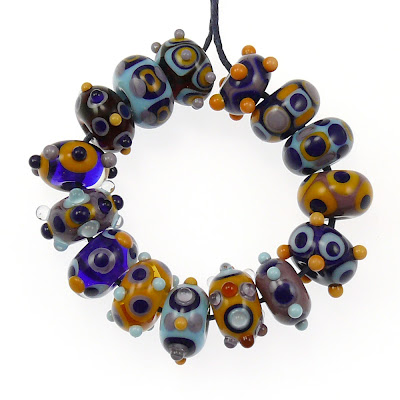 Here's a small bead strand is petiters...the whole strand is a bit over 4 inch long. Just right from a hoppin' bracelet or accents in a necklace. The below is part of a new series that I'm doing...called Silver. Yeah, I know, real unique name. I've got a couple more strands to get pics of. They are in a pile of bead strands that I have laying on my desk. Remember when I said I was cleaning my studio? Well, it got better for a while and then...all hell broke loose...the elves came in...had a drunken brawl and how I've got lampwork beads all over the place. You wouldn't believe what a mess they made. Oh well, I guess it serves me right, I wasn't paying enough. Elves DO NOT like working for beads. :-) 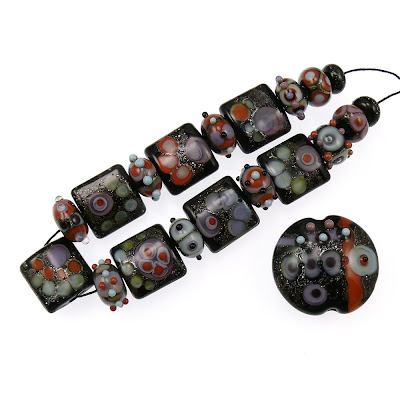 Here's a pic of one of Bob's cabs...it's sold this week BUT it is kewl. What I like about Bob and is lapidary obsession is that I get to keep all the really kewl cabs. Selfish of me...yes, but I have the great intentions of going back to silversmithing. Just as soon as I have enough space.
Btw, it's an Golden Ocean Jasper cab. 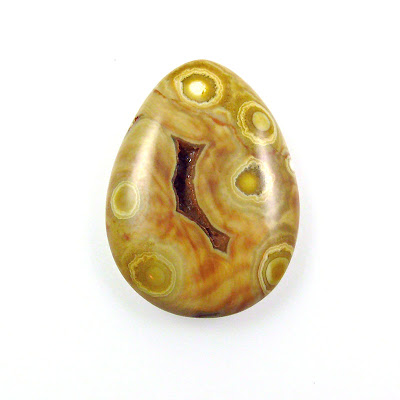 This is a really kewl one too...it's Dendritic Limestone. I'll be posting this on Etsy pretty soon. 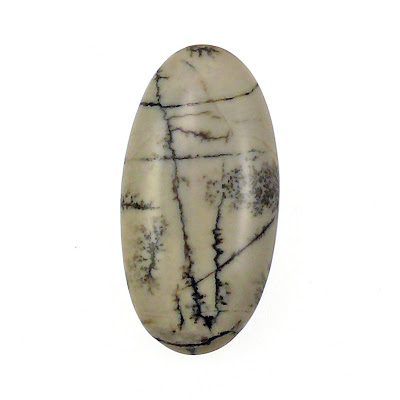 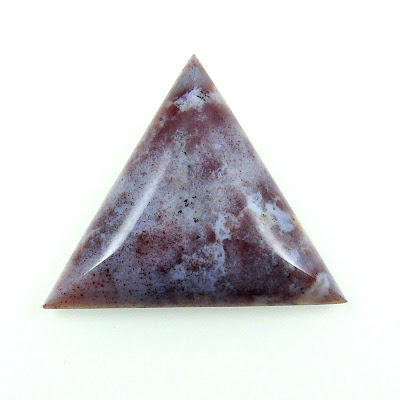 The below is what Bob uses to grind down the cabs. Just a bit of TMI. :-) 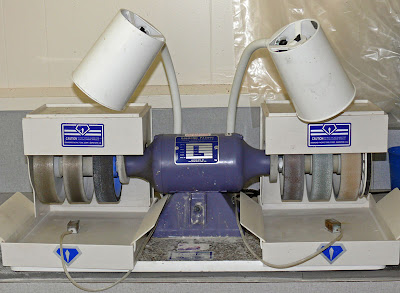 My day was spent packing and doing lots of Click n'Ships...then two runs to the post office. I'm beginning to feel like a hamster in a wheel. I did get some torch time in this evening though. Tomorrow...it's the torch ALL day. I'm in the middle of a audio book that is totally holding my attention.
OK, it's my bedtime....my peepers are closing and my backside is dragging. Don't that make a lovely visualization?
~Moon
Email Post
Labels: cabs etsy lampwork beads New lampwork series