The below is one of my lampwork and seed bead fringed bracelets. I really liked out colors turned out went it was finished. 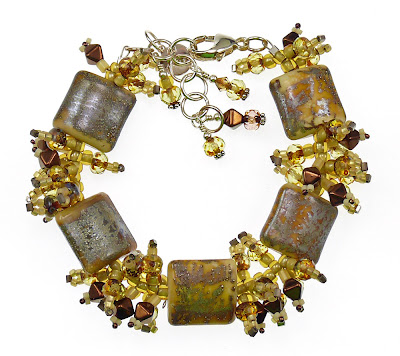 Here's another necklace...it's design is much like the one from yesterday. 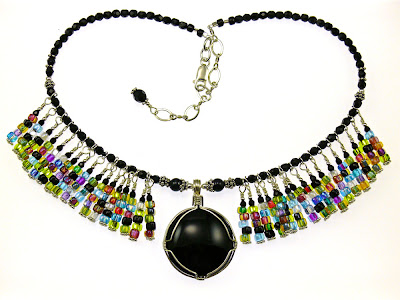 The fringe is from 5/0 triangle seed beads. The cab is black onyx and one of Bob's cut cabs. All-in-all, I was pleased with the final piece. 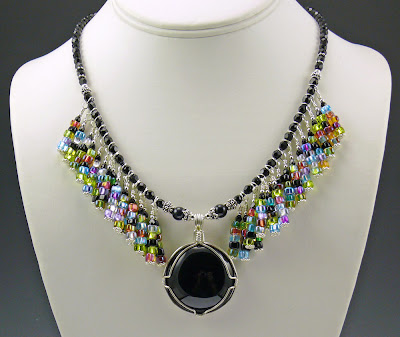 My morning was productive but my afternoon was spent at the car dealership. We were there so long that we just went out for dinner. It was just easier. By the time we got home, I was ready for snooze land.
Funny, as I get older...I need sleep. I didn't used to be like that. :-) I could run on almost nothing. Mmmmm...one of the trade offs for getting older. Getting older does have it's advantages though. I'm calmer and don't worry as much. Most things work themselves out in time. Which is an odd thought. Now that I'm getting older and have less time on this Earth, I understand that time takes care of most situations. :-) I used to care a small bit of what I said...now, I don't. Don't get me wrong, I work very hard to be polite and well mannered but I say my piece. If that doesn't work, I take the next step. Either walk away or call my attorney (which is a rare recourse for me because most issues just aren't worth the time...got pick your battles). I don't see the advantage of focusing on a situation that either I am unable or unwilling to change. Change happens in small bits at a time with a major change being the accumulation of many small changes.
There used to be a time in my life that I spent a lot of my time working with orgs such at PETA and many of the environmental nonprofits. Activism has it's pros and it's good for the soul but it came a time, that my heart just wasn't into it any longer. Too bad, I was actually good at it...well I was good at getting a point across to the people who can make changes. It might of been that my life situation changed or my opinions weren't in line with the orgs I was working with. Thinking back on it, we (the orgs and I) had some of the same goals but we didn't have the same 'ways' of getting things done. I still make my calls and write my elected officials when a issue arises. If I don't make my opinion known to them...well just how can they make a decision for me. They can't...geez, I actually think that even if they know, they vote the way big business wants them to or along party lines . The whole party line thang totally gets to me...just where does our elected officials loyalty lie? With their voters or their party? The answer makes me think that our the American system is tatters. Not to say that it isn't one of the best in the world at this time. It just has one basic fault. It relies on elected political officials with a conscious. The good ol'boy system is going to the wayside because the American people have discovered that THEY are the final opinion. THEY have the right to ask why and demand the facts. THEY even has the right to demand accountability. Our private sector can be held accountable, why not our elected officials? The age of information is in the process of changing our country as well as the world. The next decade will be an interesting one. Well...that's enough philosophising from me. Everyone has their own life to live and their own opinions. That's what makes this world so interesting.
I've got a couple more things in my life to get done...like moving back to the midwest...in the next year. Once those few things are done, it might be time to go back to some of the grassroot orgs again.
Today, I've got lots of little things to get done in the studio. I pulled out the beads from the kiln yesterday...even got them off the mandrel. Now I really need to clean them. I worked on a graduated encased set that is black based. They look very spiffy!! I've got a handful of silk ribbon and lampwork necklaces laid out on my desk that need to be put together. I really need to sit down at the mini torch and do some chain backs for bracelets. Mmmm...I think I'm going to make a few beads and Zen out for a bit on the torch.
I've haven't been on eBay much nor have I had many website updates. I've been keeping my lampwork beads and doing lots of customs. The problem now is that I have so many beads, I don't have a desk any longer. :-)
Have a happy, creative day!
~Moon
Email Post
Labels: bracelet chit-chat necklaces new jewelry