Thank You!!! Plus an introduction...MOUSE!

I want to thank everyone for their cards, words of encouragement, and phone calls. Grief is one of life's bumps but a needed one. It makes one value the simple pleasures of life.

Yesterday evening, my hubby and I decided to merge from our cave. We went out to dinner and to pick up some 'stuff' for the cats. So after dinner, it was a trip to Pet Smart. Ya know, all the 'stuff' that kitties need...kitty litter, food, and a bit of catnip. Nox had grown so much that we had to breakdown and purchase an extra-extra large litter box. It was to the point that he was backing into the litter box because he couldn't turn around in it. It was really very sad (but humorous) to watch. So with all our kitty geared purchases in tow...I spotted her.... 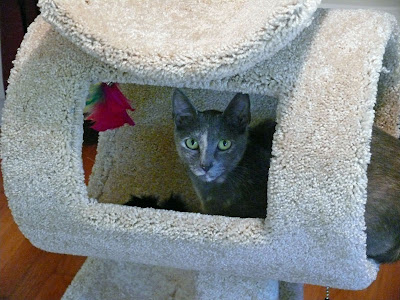 Over dinner, Bob and I were just talking about our kitty problem....Bob and I were undecided what to do. We knew that we were going to have to get an addition to the family soon. Nox (the big ol' Texas bubba kitty) wasn't letting me sleep since Cheslie passed away. He played with Yarrow and chased Cheslie's tail. It gave Nox something to do while I was in the studio. Sugie (the toothless-old as dirt-Siamese) will play a couple minutes or so until she's had enough of Nox. Sooooo...I became his new play toy. Then when I decided enough was enough...Nox became desperate enough to use Bob as the new play toy. Well...let me tell you, that Bob really, really isn't play toy material. Nox got a bit of a surprise and then a bit miffed when Bob would not do what he wanted him to do.

Well, you see that she is lovely. She's a rescued Oriental Shorthair from P.A.W.S.. It's a no kill shelter in Kyle, Texas. She's a bit less than two years old, had a litter of kittens that have all been adopted, weighs about 6 pounds, and has a lovely shade of blue grey with patches of peach. 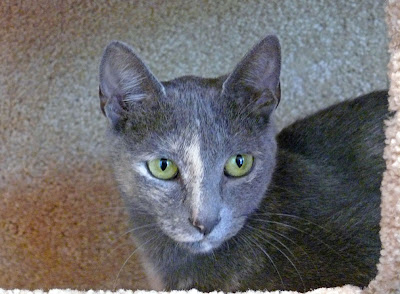 Anyway, we picked up another cart and gathered up a carrier plus a kitty condo. Bob was saying that is she was going to live in our closet/dressing room for the next month...he'd rather she claw her condo than his suits. He did have a point there. It will take about a month of her living in there (don't worry, it's larger than our bedroom...has four nice windows...several comfortable kitty areas...with lots and lots of soft clothes for her to play on) 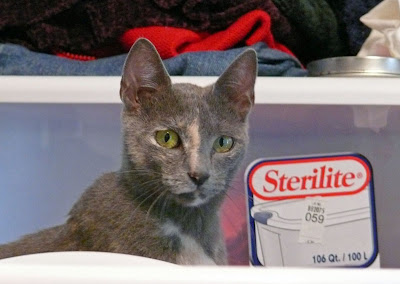 She's a bit timid and hand shy...it seems that she has been abused...but she's already found her purr box. She's also a bit skinny but that's already changing.

Right now, Nox and Sugie are both camped out by the closed door. No hissing yet but...it's bound to happen. It will take about a month before everyone makes nice. Ah...the way of cats.

Just to let everyone one know...I'm back on the torch again. Hopefully you will be seeing to new and interesting beads from me.

Thank you everyone!!!! Have a happy, creative day!