My weekend was a pleasant one. Saturday, I sat on the front porch waiting for the mailman to bring me my copy of HP7…The Deathly Hallows. (I do believe that J.K. Rowling out did herself this time.) We had to order two copies because Bob and I didn’t want to fight over it. Anyway, the mailman didn’t arrive until a bit after 5pm. I can’t express in words just how grumpy I was. I saw down and started right away. I finished up before midnight. Bob, poor dude, was up until after 3:30 am.
The best quote in the entire book was Molly Weasley saying, “NOT MY DAUGHTER, YOU BITCH!!!” I also rather enjoyed the end where Harry and ‘Riddle’ have their last conversation. All in all, I enjoyed the series and HP7 but what’s next? Anyone of another kewl, action backed series?

Yesterday, I hit the torch…lots of new disks sets with be up soon. During my torching session, I listened to Stardust by Neil Gaiman. I'm a big fan of Neil Gaiman. I find his work entertaining...actually it's fascinating to me that he creates such imaginative images when I'm listening to his stories on audio book. I think that some authors are meant to be listened to...Neil Gaiman is one of those. I wish that he would do radio plays. 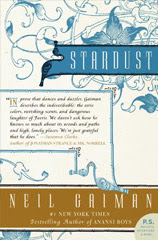 Today, I'm starting the Chrestomanci series by Dianne Wynne Jones. They are short books, less than 8 hours each.
Anyway...here's some new lampwork bead sets. The one below was made with a couple odd lots of Vetrofond glass. It's a fun, abstract set that I made in large blocks of color. Just right for some of the new fall fashions that I'm seeing in the stores. 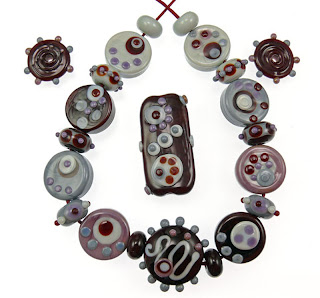 The below looks MUCH nicer in person. I'm having a lot of trouble with my photography skills with certain colors. Purples and blues are at the top of the list. Alas, this set has both of the colors. 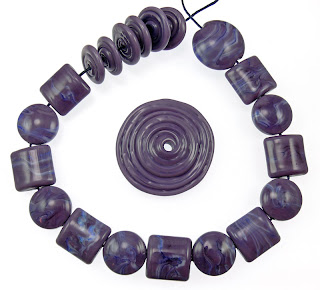 I will be placing both sets up on ebay this week. I've also got about 10 or so sets to be adding to the website. Plus a huge pile to clean. Most of which, I'm keeping. :-) Well, that's it for today...got lots to do!
BEAD ON!!!
~Moon