Here's a set that I like...it's done in a simple color scheme but in combo with the busy designs, it works. This set will be up on eBay in the next week or so. 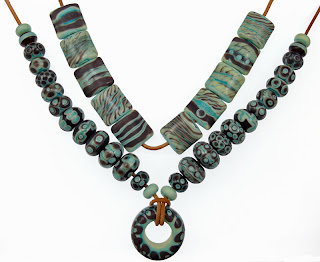 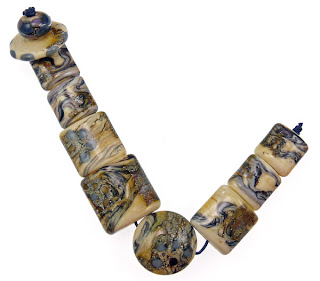 I've been doing some experiments lately. I've gotten a whole new load of gemstones and have been torching accent beads. I've got a large pile to still take pictures of. Funny, I would much rather be torching or working on my new jewelry collection. I wonder why? :-) 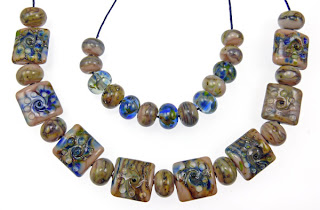 Anyway, I've got to get a few things done around here...I'm expecting to sit on the couch and read the last Harry Potter book tomorrow. That should cheer me up!!!!! I've been waiting for a year for the book to arrive.

I haven't been doing my typical hours at the torch. I've been actually been either at my bench or doing seed bead work again. Mostly experiments. I've got several designs drawn and laid out but I'm still not happy with them. I'm wanting to add more copper to my work. It gives a earthy favor to some of the pieces. It's been a while since I've done a collection/line.

Several folks have written me and asked 'whats up with the lack of bead sets?' Well....I'm keeping most of the beads for me. (if you want something, let me know and I will work on it for you) I'm working on a new body of work for next spring and summer. We have been in Texas for almost three years and it's been a nice vacation in some ways. Now it's time for me go back to what I do best...jewelry. It's not like I'm walking away from lampwork...I'm just not spending as much time on the torch.

Here's the thing, I'm getting a bit bored with sitting behind the ol' Bobcat all day. I've come to the point that I can be off the torch for several days and still go back with ease. I miss the design aspect of jewelry.

I still haven't unpacked most of my metal equipment and am still on a MINI bench. Mostly for chain so I'm not going to do any of the larger silver pieces that I like best BUT I also like making chain too. So that works. To be honest, I just don't have the room in the studio. As far as working in the other aspects of glass. I've still got the glory hole and extra torches packed as well as the larger fusing kilns. Here again, I'm out of room.

This 'out of room' concept has been plaguing me since we moved from a commercial studio. What I need is at least a 1000 sq ft of open space with at least 100 amps. We have grid panels to construct our own walls so the open space works for us. It would be nice if the space had a hot space; if not, that's easily taken care of. (I miss blowing glass) We could split the studio too. A lot depends on where we move to. Well, actually it depends on the type of weather we move to. If there's snow in the equation, I'm thinkin' that I just might have the seed beads at home.
I did pick up a half dozen or so large hole mandrels. The large hole beads are something that I like making BUT...I've just figured out some rather kewl jewelry designs with them. The beads just scream WIRE. Those are also in the drawn up stage. I'll be working on those for the next couple of weeks. I'll post some pics when I get them done.
That's it for me...I'm off to the studio. I've got to get a few things done so that I can take tomorrow off.
Have a Happy, Harry weekend!
~Moon
Email Post
Labels: chit-chat ebay auctions lampwork beads New lampwork series