I'm repeating myself again, but I've been spending lots of time on the torch. Mostly doing experiments...some haven't turned out like I've wanted. Those you never see....most of those hit the water. Some like below I've been pleased with. The goal was to created beads with a natural appeal of Brazilian agate.

Some of you have known me before I got into lampworking. For those that don't...I started out as a jewelry designer. Then I moved quickly into metalsmithing and then pottery. My hubby, the IT geek, has merged his hobbies of chain maille and lapidary into my business. At any given time, my studio (yes, I still claim it as my own) has several different projects happening at the same time. My hubby has been cutting some lovely pieces of golden ocean jasper and Brazilian agate. Both have the hues of Earth melodies within them. The below beads are my humble take on the stones. 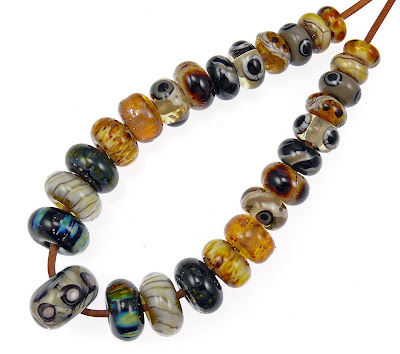 The above were made on 1/8 inch mandrels. I need to get some jewelry completed as examples...I have but they have sold so quickly that I didn't get pictures of them. So I will try to get some more done.


The below were made on 5/64th mandrels...my fav size for wire and fringe bracelets. 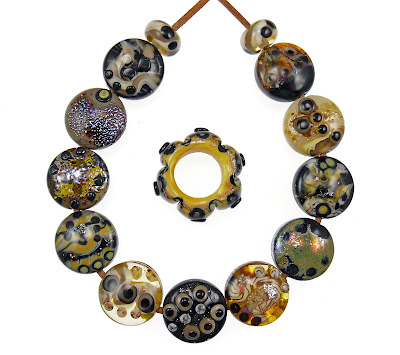 It's a bit early for me...my sleeping habits have moved to it's summer hours. Right now it's 4am and one of the few times that's it's quite. I'm taking advantage of it the hour and getting my day started.

Have a wonderful day!