Yesterday it was in the upper 70's here. It was wonderful weather for sitting behind a torch. Today it's suppose to be a high of 83 degrees...right now it's about 60 degrees already. It's great weather but summer will be here soon. Summer in Austin starts sometime late March or early April. That's 90 degree days until sometime in mid to late October. It's the land of never ending summer.

The below is some pastel hues of spring without the 'girly' pinks. It's one of those strands that can be used year round. That has been my aim lately. I know that each season has it's colors but just how many pieces of art jewelry in pink or pale blue do ya need? 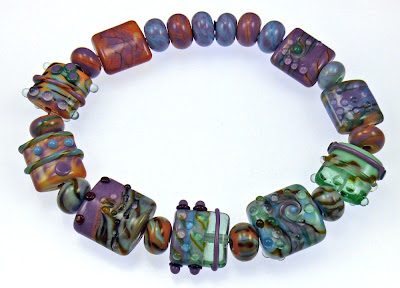 The below has just about the same colors as above but I made a few flowers too. There's just something about flowers and fringe bracelets that I like. 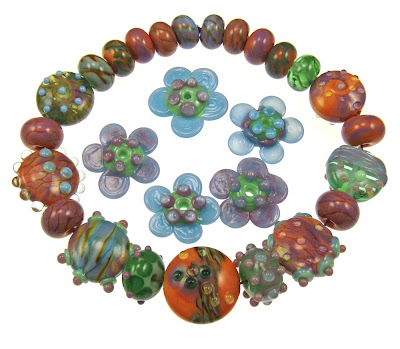 Today and most of the week, I will be working on reduction glass. There are so many beautiful shades of metallic hues that I've seen in seed beads. So I'm taking several days to experiment with the metallic/reduction glasses. I should have some pictures in the next couple of days.