I got up early...well, not really. It's just that I'm staying up later and sleeping later. Even though we have more sunshine here than most of the other areas of the country...there still isn't enough sunshine for me. I'm not much on grey, dreary days. Yesterday was on of the first totally grey (that it wasn't a howling rain included) day since we moved to Austin. When the days get longer, I will change my sleep patterns to the amount of sunshine and heat. In high summer, I normally nap in the afternoon because I can't get the studio cool enough to work. The hottest part of the day around here is around 4pm or it feels that way. In summer, it really doesn't start really cooling off until early in the morning. I still haven't gotten used to Austin weather. I have to admit...it's nice now. 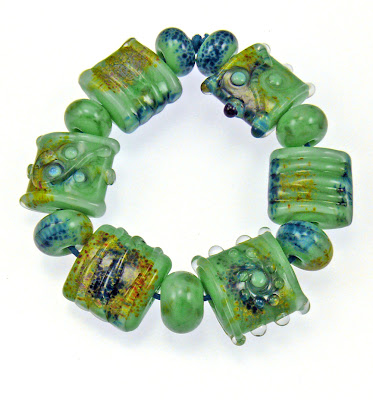 This is a small lampwork set that I just made and cleaned. Just the right size for a bracelet. It's all 96 COE glass with sprinkles of different powdered frits.

I've been busting my hindparts making very complex beads with stringers, twisties, and lots of dots. Many are lovely beads, but I like the more straightforward beads with larger color blocks to make jewelry from. When there is a huge amount of color and texture happening, it seems like everything blends together on the bead. It would seem like the simpler beads take less time, they really don't. Well this small set didn't because I used a lot of clear accents. It's hard to tell by a photo what the clear really does. Anyway, the above does look much nicer in person.

I've been waiting for weeks for a certain tool to come available...it's a squishier for disks and buttons...the one I wanted is handmade by Jeff from Inspirational Tools. I ordered one and I should get it late next week sometime. So hopefully, you will start seeing some buttons from me.