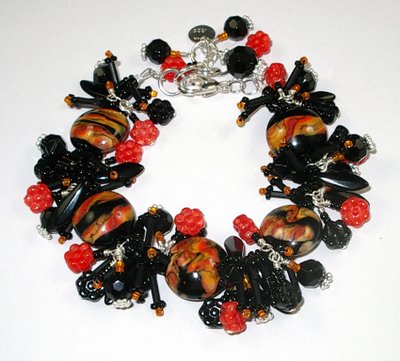 The above is the finished product. It's another one of the mixed fringe bracelets. The photos show the coral more red than it is in reality.

The below is the beginning...I will finish up the necklace and earrings tomorrow. Why do I take pictures of the bead gathering? Well, it's the best part for me...I like the color. :-) 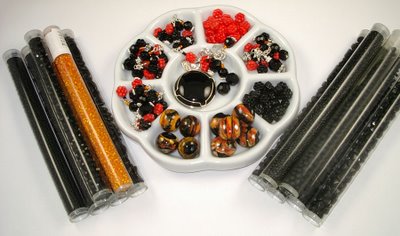 It’s five years after one of America’s saddest days. I remember what I was doing that day when I heard the news. I was in our home in Indianapolis at the time…getting ready to leave to open up our shop for the day. I got a call from a friend, telling me to turn on the TV. The first thing I saw was one of the Twin Towers exploding. I was stunned…then I heard the rest of the reports. I will always remember that feeling…that moment in time.

The days to follow were eerie. No planes in the skies…not a lot of cars on the street. People were very quite…people were seeking solace where they could find it. At the time many emotions hit me like a brick…I was stunned, then afraid, then I was pissed off.

Now as I sit here remembering that day, I’m still filled with sorrow for those that lost their lives and my heart goes out to their families. But I’m still pissed off. I don’t care what dirty little secrets that our government has…I don’t care if the al-Qaida's has it’s reasons. I have been reading about our government’s steps to up security. I also realize that we aren’t safe…we are safer but we aren’t safe. Does that make me afraid? Hell no, it pisses me off. I would rather die than to get on my knees and beg day after day. Big words…no, I’m a realist. I don’t have it in me to live with the constant uncertainty…I’m a spoiled American with a stubborn streak.

It’s been happening in Israel for a while now. All-in-all, I have to give the Israeli’s a high score on their patience. Just how many Americans would of put of with the number of suicide bombers that Israel has? I honestly doubt that most Americans could live in that climate of fear and uncertainly. I also believe that if that happened in the US, I think we’d crack under pressure and come out like snarling dogs. The end result wouldn’t be pleasant…because if we are losing, we’re takin’ the whole world with us. There wouldn’t be a Middle East. It would be a sheet of glass or they would be bombed back into the stone age by now.

Is that really what the terrorists want…the total and absolute destruction of the planet?

Even if there isn’t a total global destruction…the world economy is based on the US economy. So what that loosely translates to…a US economy crash will result in millions that will die of starvation and disease because Americans won’t be able to pick up the tab.

I am still proud to be an American and wouldn't want to live in any other country; no matter what the world thinks of our faults.