Boring Beads are my Heroes!!!! 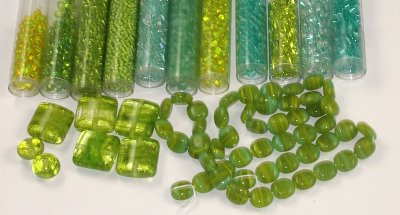 ABOVE: I liked the aqua with the lime but I decided for more visual punch.
BELOW: There the below color scheme I used the with boring lime lampwork beads. 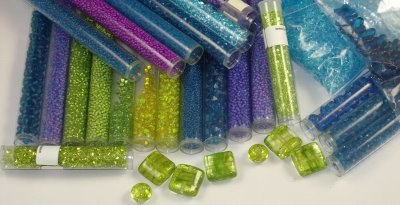 BELOW: Here's the finished bracelet. I have to admit, it really looks much better in person and looks great on. I've got to finish the earrings this morning.

Who’s your HERO! Who inspires you!

Not just boring beads are my heroes…of course my other heroes are my hubby (Bob) and my parents. My hubby is my hero because he puts up with me. I’m not the typical mid-aged wife. In all honesty, I’m a pain in the ass sometimes. (I bet you couldn’t of guessed that one, huh?) Actually, I’m opinionated and will freely make my opinions known to anyone that asks. Sometimes I make my opinions known even if you don’t ask.

My parents are top on my list as well. They taught me to respect people and understand the value of compassion. Because of them, the following people are also my heroes…

Rosa Parks for her guts not bow down and her willingness to be arrested for civil disobedience for something she believed in. She pushed forward with Martin Luther King, Jr. to removed racial segregation in the US.

Annie Oakley is my hero for her contributions and support of women’s rights. She was known for her marksman abilities but she also campaigned for women to have the right of paid employment, self-defense, and participation in sports. Where would we be today without women like Annie Oakley?

Susan B. Anthony and Elizabeth Cady Stanton for their guts and selfless dedication to a belief that women are NOT second class humans. I think that concept alone makes my point.

These women were all rebels for a cause. These women have enable me to live out my dream of being self-employed, to speak my mind, and to stand up for what I believe in.

On a different tangent…why is the US giving foreign aid to countries that don’t respect women’s rights…like Pakistan? Their current law that was approved in 1979, states that to prosecute a rape case, there has to be testimony from four witnesses. That makes rape almost impossible to prosecute. Also if the woman fails to prove her case, she can be convicted of adultery. Which is punishable by death. Ok folks…connect the dots here.

Is this another Islamic cart and pony act? I don't know the full reasoning behind such laws but it fits right in with the typical. So would changes to these types of laws be considerd un-Islamic? That's a point to ponder. Or is this an opinion of someone's view of Islamic law? That's another point to ponder. Actually I could give a rat’s ass about somebody’s religion. IMHO, Religion and politics don’t mix well. It’s a violent no win situation. Also it seems that politics defiles religion. (so why would anyone want the mix the two...that's like mixing oil and water)

Religion should bring humans together by the common ground theory instead of separating us further away. Politics…well lets just say that politics doesn’t mix well with anything.

Back to the point…why are we giving foreign aid to a country that is in direct collision with our own Federal Code? Human Rights issues are happening all over the world…so why do we give money, hence supporting governments that do not hold to basic humanitarian principles? Isn’t that enabling the issues?

Some might say that we have no right to interferer in other cultures, societies, or countries…I agree. I also agree we should not be giving our tax dollars to any countries that promotes sexual violence…or genocide…or torture…or ethnic cleansing…or terrorist activities. If a country doesn’t have laws to prevent such abuses or they don’t enforce such laws, we should not enable their government. It’s the US citizens’ tax dollars…I don’t want my share going to countries like Pakistan. If they change the law, that still isn't enough...they have to enforce the law.

Well, that enough of my rants...

Have a wonderful and creative day, I'm off to start my day!