Opinion and a Confession 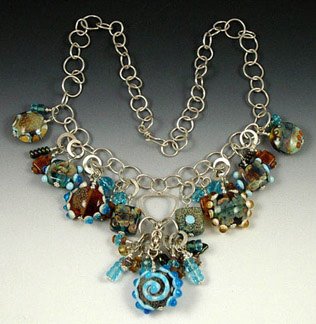 I made the above a couple of weeks ago and wanted to enter Connie Fox's contest (http://www.conniefox.com/Home/Contest06.htm) but I'm not sure. Any comments? I don't know.

Here's some more eye candy...I made the beads last week but didn't get them pulled from the mandrels and cleaned until yesterday. I kinda like the look... 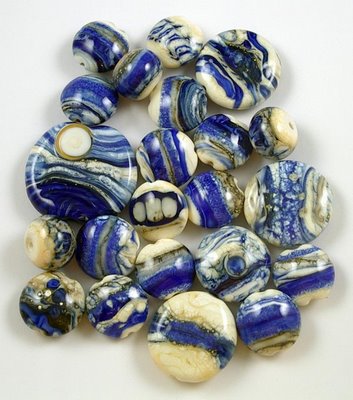 I spent most of the day yesterday working on a new design…beadwork bails for pendants. Which sounds kinda easy. It’s not. The reason being is what looks great, isn’t stable. What’s stable isn’t very ascetically pleasing to me. I’ve still got a lot of work on this design.

During this creation session, I had a lot of time to think. I was reflecting back on a couple of years ago and my show seasons. Pre-Texas, we averaged 2-3 shows per month. One year, we did 34 shows. (I have a little bitty show next weekend so this must be the reason why I was thinkin’ about it.) I think that year traumatized me. There’s a reason why most artists don’t do lots of back-to-back art show streaks.

One, inventory. It’s hard to keep up.

Two, the weather…I’m talking rain, sleet, hail, tornadoes, 100 degrees on asphalt (my birks literally stuck to the pavement at that show), and freezing cold at outdoor shows.

Three, it’s the questions that you get from the general public.

Anyway, I was reflecting on the types of questions that stuck with me. A lot of them were the same…like…

Do you have a card? Or website?
When are you doing a show around here next?
Do you take credit cards?
Do you do customs? (a typical question except the one time that a person asked me to make a necklace for her ferret.)
Do you teach? (the answer is “no, I don’t have the time “ and I don’t. The honest answer would be, “I’m not patient enough….there isn’t enough rum and valium in the world to make me want to teach”)

Then there are the ones that vividly stick out…the ones that make you want to hack up a hairball or pee your pants laughing….

(In regards to lampwork) How did you glue those dots on?
I try to avoid answering this question as much as possible…it’s easier to give them a handout with pictures.

Oh…will this match my suit (blouse, outfit, etc)?
I try to keep a straight face on this one and just reply, ‘I don’t know’ with a smile. One time I snapped, I just burst out laughing….while muttering in between snorts, “you gotta go…you are too &8%@# stupid to buy my jewelry” while pointing to the direction out of my booth. Was that a nice thing to do? No it wasn’t nor was it professional of me to react that way. I regret it but I couldn’t help myself. I just lost it.

Oh, did you make that?
Well, one time I just snapped, I replied…”No, actually I run a sweatshop for illegal elves and fairies that don’t want to be employed in the succubus trade”.

Can I take a picture of this so I can make it at home?
This one doesn’t even deserve an answer. I just politely respond by pointing in the direction out of my booth with a smile on my face.

How long have you been doing this?
Generally this one isn’t a big deal and just tell them my life story. Sometimes, I’m too tired to go into a long dissertation, so it’s just “a long time” but I’ve got a smile on my face when I say it. BUT there are people that say it with a nasty tone of voice…I normally respond to them with a “too long” sort of answer and hang my head.

Or the primo one that I used to get and still do…Where do you get your inspirations from?
I do get a lot of my inspirations from nature, and mythology. That’s what I tell the person…but my brain isn’t wired like the normal person so I don’t go into the whole creative mind concept. There was one time that I snapped and told the blunt truth of the situation….”it’s because of the amount of acid I did when I was a kid, I still get flashbacks and tracers even now to this day…that’s where I get all these kewl color combos and abstract ideas from”

There was another time that I snapped (actually, I just wasn’t thinking and the words just tumbled out of my mouth)…”Oh, I speak to dead people.” That was right after I saw “The Sixth Sense” and I thought it was funny. The customer didn’t and pretty much ran out of my booth with a terrified look on her face. I still feel bad about that one to this day.

(disclaimer here…I don’t even drink socially now…my only major vices left is a couple cups of java and cigarettes. I’ve limited my caffeine intake and smoke only ultra lights…even they are on their way out of my life. I don’t have any traumatic or abusive issues in my life. In other words, I’m now boring and count myself very lucky.)

I’ve had almost a two-year break from doing shows. I actually miss them but I have learned a major lesson. I do not have the correct personality to do a large number of back-to-back shows..AND…if you ask me a question, I now work very hard to answer in a polite and professional manner. Maybe I'm growing up or just maybe I know my limitations.

I've gotta run...I've got to clean the studio and pick up the house. My OCD is driving me nuts.

Have a happy and creative day!