Gettin' into the Blue Matter! 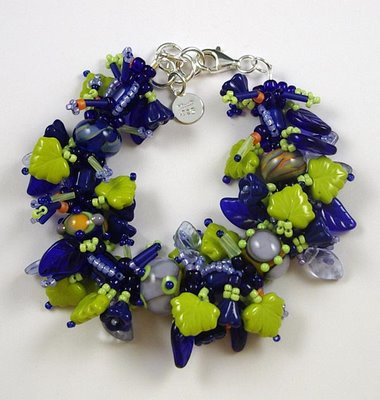 The above and below are a bracelet that I made yesterday. I like the contrast of the color scheme. It's not for everyone though but it's something that I would wear to perk up a navy jacket. There is also a flirty feel to it.

The below is how the bracelet first started out. It's very basic and BORING! The components are lampwork beads and chain that I made...then I added some 6/0 and 6 accent beads. After several hours, the above is the finished piece. 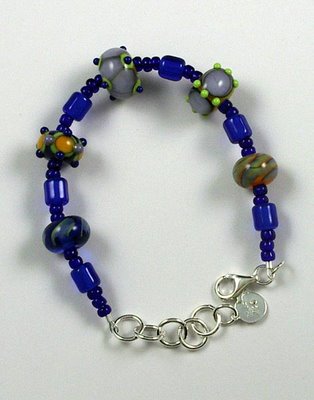 Yesterday was kinda of a productive day in the studio. Another one of those, “I got too many ideas!” days. It really started out slow…then I got a second wind. There was about an hour there that I just sat and stared at my beads. Stared out the window and then stared at my beads…this scene repeated several times. Then I started talking to them. Then I was giving them their own voices. OMG, somebody would of walked in, they would of thought that I was in serious need of medication.

Anyway, I had The Sixth Sense on when this was happening…Haley Joel Osment was say, “I see dead people.” I’m laughing my ass off because…I’m talking to beads. Mmmm…it was a lot funnier being there than it is reading about it. I guess you needed to be there to get the full humor of the situation.

Ya know, there’s just some wrong about doing voice overs for beads. Next thing you know, there will be bead suffrage. I guess that really wouldn’t be so bad. Do you think that we would have George W. Bush as President if beads could vote? It can’t be ALL his fault, we do have the Congress and Senate too. Well, it’s kinda like Homer Simpson doing business with Cheech and Chong. Take New Orleans for an example…there was a whole lotta promises made right after Katrina. One year later, half the city is STILL underwater. That tells me that there is a whole lot of talk with not a lot of action being put forth. What hope is there for the people?

Then there is the UN saga…oh my…a South Park with guests from all over the world. So can the UN help the world. Is it supposed to be an unbias body to make decisions for the peoples of the world. Yeah, right! Tell me another one...if you believe that, I've got some swamp land that's for sale.

I see a whole lot of nothing going to get done when the members are looking out for number one’s (govt) interests. So what happens to the people? The UN has turned into a global meals on wheels. What ever happened to that great organization of nations? It was a global TIGER. Mmmm…the tiger got old and toothless…all because nations prefer self-interest. Sometimes doing what’s right isn’t easy nor throwing up smoke screens isn’t always going to hide the dirty deeds either. We live in a world of mass communication…it’s harder everyday to keep those smoke screens up and hazy.

I can't tell if the US is using the UN as a way to be the global police or the UN is using the US as their form of military might. Maybe it's both....either way, it's not working out well. I guess it comes down to this...the day the US citizens decide that their govt works for them and not the other way around, is when there will be changes made on a global scale. One strong voice can be heard over 1000's of screaming ones. 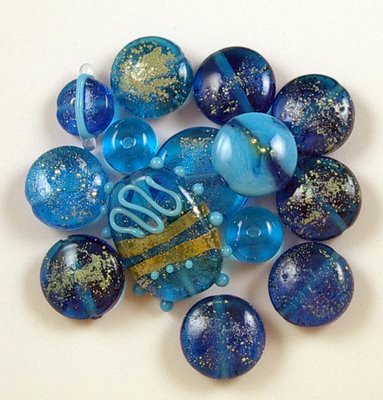 Here's another set from the metal series. I must be into blue lately. Every glass rod I pick up is blue. I'm going to work on breaking out of this mold today.

Have a happy and creative day!!!!