Lots of Raku Lampwork! What I've been up to....

Well....it's been a while. I'm in the mist of a studio clean up. The place is a pit...I can't see my desk top in the bead room...the shipping area looks like a bomb has gone off...and my torcher chamber looks like the glass monster had a case of diarrhea. The entire studio...including my hubby's areas...needs a shovel taken to them. Beats me why too. It's like things just pile up to a point that I just can't take it any longer. Between the lack of space and my OCD, spring cleaning has come early.

Plus I'm in the period of sorting and organizing too. That's the reason why it's taking me so long. I've got all the displays packed up in Rubbermaid totes and ready for the move. Most of my metalsmithing tools have been already packed, I opened the boxes up to see what I had inside them. I finally found a decent crate to pack the drill presses. What a PITA, those puppies are heavy. I also found a crate that I now store the glory holes in. Now I'm in the process of sorting though paints, inks, dyes, glazes, and all the other bits that I work with. Well I used to work with when I had space. Ya know, moving can be a total PITA but living three years without a decent sized studio has just about did me in. BUT I know that there is a light at the end of the tunnel. Since moving is about 6 months away, I'm already getting organized. Most of my packing area now is housed in boxes that can be turned up and taped up for moving. The bead/jewelry making room is undergoing a massive (and continuous) change. As I sort, I also bag and label. Then it goes into a clear box that I can find things easier and can be packed into a larger box for moving. My goal list for next week is to sort my library and put up all the magazines. OMG I have years upon years of Lapidary Today. I have every Bead & Button and Beadwork magazine published...not counting just about every jewelry, bead, and trade mags out there. Plus there's also several other mags like Bella Amorie, a couple sewing mags, and paper arts that I subscribe to. You have no idea just have many periodicals that is out there in piles. It's not as bad as it used to be...I have already spent a small fortune in magazine files...but it seems that every couple of months, I'm buying more. Not counting all the catalogs that I get on a yearly basis. OMG...it's like I'm drowning in paper.

Other than, I have been out at the torch recently...has to take a bit of a break from cleaning and organizing. I just did several sets of raku accents beads...here's the first set on turquoise. The disk was an experiment...square. Ya know, I just never realized just how hard those puppies are to make. 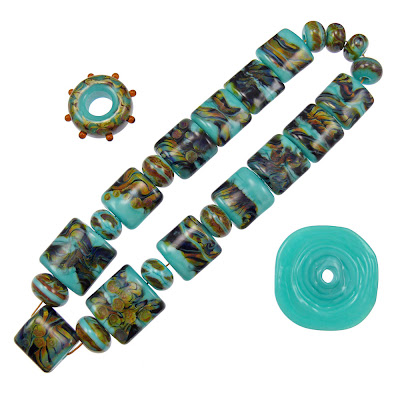 Here's one with an odd pinkish-plum-lavender...depending on how the light hits it. Theses are lovely...I made me a small set to made a fringe bracelet with. 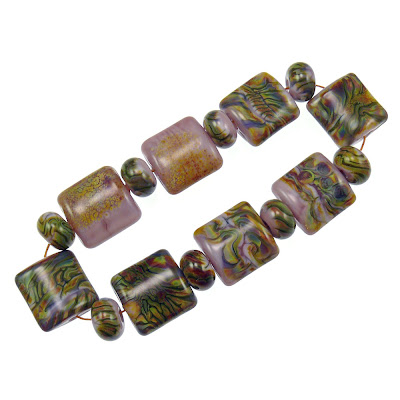 The below has a dark sea green base...which is much darker in person than in the picture. I had to back light all the photos because I couldn't get enough light in the studio today. 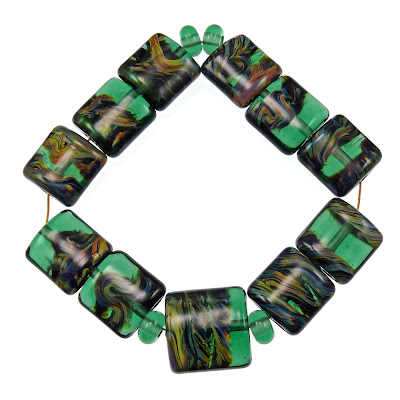 Here's a set on a alpine blue (the hue of soft, well worn jeans) and it also has a couple of focals that go with the set. 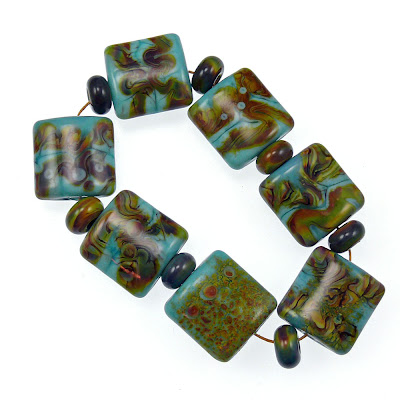 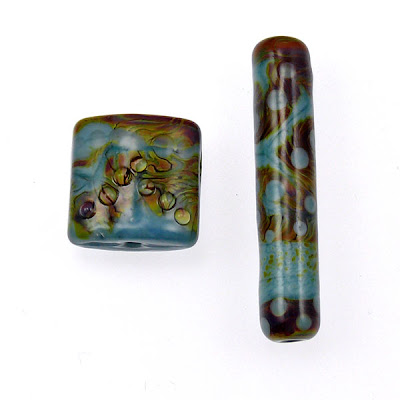 Here's a raku set with a black base. The focal has been encased so it's a nice size. I have to admit that these beady dudes turned out well. 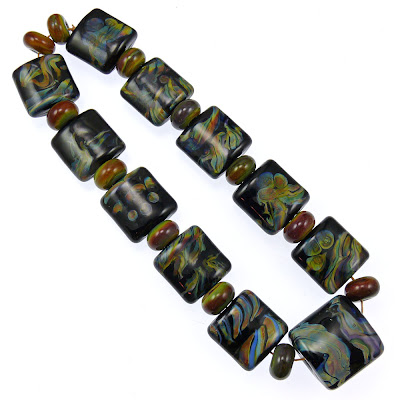 Here's a set of plum, ginger, and a sky blue with lots of raku. There's some raised surface decoration but I've melted it deep so that it's semi-raised. 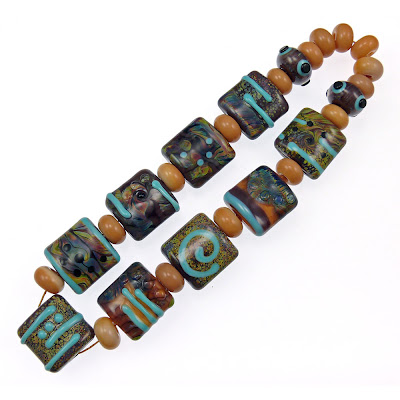 Here's another one that has a ginger base with violet accents. 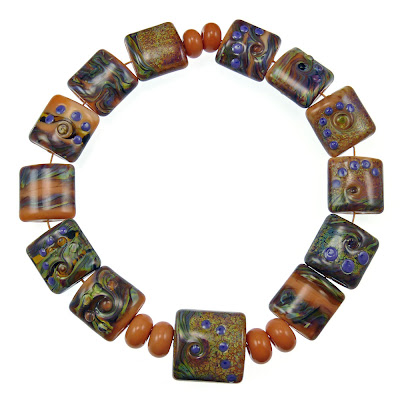 Well that's the end of the picture show. I'm off to do a few errands and work in the studio.
Have a great weekend!
~Moon
Email Post
Labels: lampwork beads